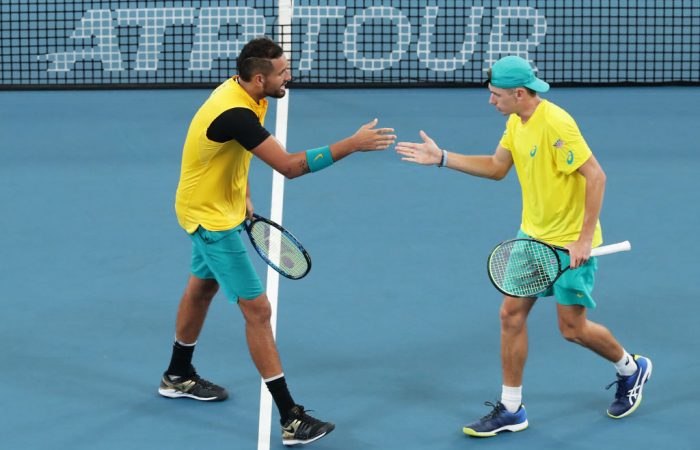 Hewitt will have no hesitation partnering the two up again if Australia’s semifinal on Saturday night goes to another deciding doubles rubber after the first-time pairing’s epic super-tiebreak win over Great Britain.

Hewitt gave De Minaur a rare day off after the 20-year-old’s Herculean five-hour singles and doubles effort against the Brits, but isn’t concerned about his ability to back up for twin duties if required.

“He’s played enough tennis, he’s hitting the ball well. For him, it’s about recovery – that took a massive effort from him, not just physically,” Hewitt said on Friday.

The Australian captain admitted he rolled the dice throwing De Minaur back on court barely an hour after his sapping three-set singles loss to Dan Evans.

“To bounce back and lay it on the line again, if that didn’t go our way which it could have, he would have been shattered,” Hewitt said.

“It was a bit of an emotional rollercoaster for him.”

As Australia awaited the winner of Friday night’s fourth quarterfinal between Spain and Belgium, Hewitt revealed how Kyrgios, three years De Minaur’s senior at 24, connected with Australia’s youngest team member when he was a Davis Cup orange boy.

“He went out of his way when we put a lot of faith in Alex,” Hewitt said.

“Nick was fantastic with him. He’s always been great with the orange boys, the younger kids when they come. He enjoys the two-on-one sessions, working them really hard.

“I think he gets enjoyment out of that, and Alex was never a kid who was ever going to give in or show pain and I think Nick appreciated that as well.

“So they’ve struck up a really good friendship because of that.”

The chemistry showed as Kyrgios, according to De Minaur, “carried” him during Thursday’s tension-marred super-tiebreaker.

Hewitt says De Minaur also brings out the best in Kyrgios, especially on the practice court.

“Just Alex’s intensity, the way he goes about it. Nick can’t switch off in a practice set or a practice session with Alex,” the skipper said.

“That’s fantastic, and both of them push each other to get better as well. It’s fantastic to see.

“At the moment, even though Alex has passed Nick in the rankings, Nick couldn’t be prouder. He’s like a little brother to him out there firing him up and wanting him to have success as well.

“Alex growing up, Nick was always that kid that was the top Australian and the big prospect so, in some ways, he’s probably idolised Nick.”