Reinvigorated after almost 20 years on the pro circuit, Sam Stosur has unfinished business ahead of the Australian summer, which began brightly for her in Brisbane. 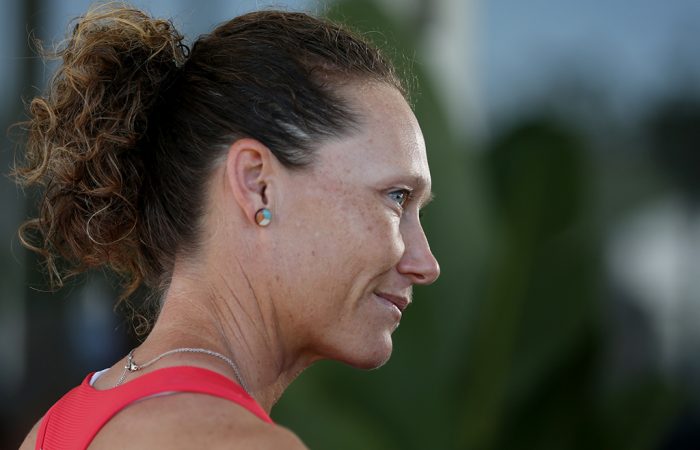 After two decades on Tour it would be reasonable for a player to lose some level of motivation or direction.

But not Sam Stosur.

The resurgent Australian continues to drive for improvement and progress, seeking another significant accomplishment in a glittering career.

The Queenslander, who was awarded the Spirit of Tennis Award at the Newcombe Medal in December, continues to break new boundaries and in 2019 rebuilt her confidence with a fresh perspective.

“When your ranking’s down to No.130 and you’re not sure about where you can play and all of that sort of thing, there’s certainly questions you start asking yourself – more so than ever before,” Stosur told tennis.com.au, describing the mental fortitude that has seen her finish 16 straight seasons inside the top 100.

“I think it’s hard, when you feel like you’re doing so many things well and you’re still trying to adapt and learn and get better, and then you’re not getting rewarded for that, you take a bit of a hit sometimes.

“In tennis you can turn things around very quickly and sometimes the difference between winning and losing is so small. And then all of a sudden you have a completely different outlook on things. You’ve got to stay positive and keep trying to look at the big picture and that’s what I think I’ve done very well recently.

“That’s what I’ve done my whole career actually – I’ve always been able to come back from little down moments and periods and then bounce back and come out on the right side.”

In singles the 2011 US Open champion replenished her ranking, helped by reaching a first WTA final in over two years in Guangzhou.

Competing in doubles, Stosur flourished alongside Zhang Shuai to lift the Australian Open title, providing the platform for the duo’s qualification to the WTA Finals in November.

A significant part of Stosur’s recent success has been the 35-year-old’s revamped off-court set-up.

The world No.98 travelled the whole of 2019 with strength and conditioning coach Matt Coridas — whom she began working with in 2018 — while Rennae Stubbs arrived as a new coach in August.

Different voices and methods have reinvigorated Stosur, particularly on the physical side, which has always been a strength; she has kept mentally sharp with Coridas’ tennis-specific adaptations.

“I think it’s just (about) being smarter (at this stage of my career),” she said. “Whereas maybe when you’re 21 you can bounce back straightaway, you have a few hard matches, you’ll still feel like you want to train the next day and can do all those things.

“When you’re a bit older it becomes a lot harder to recover.

“It’s so much better (changing it up). Because there’s only so many things you can do by yourself in the gym and with strength or conditioning. And when you’ve got someone with you who’s creative in that way anyway, it makes it so much more interesting and enjoyable and fun.

“When we do conditioning sessions, we’ll mix it up with treadmills, bikes, the VersaClimber. Then you’ve got to catch balls or throw balls into a box with your heart rate still really high. Or we’ll play little card games when you’ve just jumped off the treadmill and you’ve got to work something out.

“So it’s interval training with an element of concentration. Nobody I’ve worked with has been like that before. It’s so much more interesting and so much more specific to tennis, because we play long points and your heart rate will be really high and you’ve still got to think about ‘Where am I gonna serve this time?’ It’s all about making decisions.”

“That’s what I’ve done my whole career actually – I’ve always been able to come back from little down moments and periods and then bounce back and come out on the right side.”

Having accomplished so much over the past 20 years, Stosur still maintains a passion and pure pleasure in competing at the elite level, despite the demands on her body and mind.

“I still expect a lot of myself and know I can do A, B and C and if I still did that to the level where I think I’m capable of, I know I can still be in a position where I want to be,” the Queenslander revealed.

“I’ve realised — and I’ve known this my whole career — but I really love what I do. I know once I do stop, you’re not going to be able to get that same excitement, or adrenaline or anything like that watching tennis. It’s going to be very hard to replicate all those emotions and feelings, and everything I’ve been able to get out of the sport, when I’m not playing.

“Things kind of shift a little bit. But I don’t want to do this if I’m not competitive, and don’t have that drive and that will. At the end of the day if you go out there and have fun but you’re losing every week, that’s not fun.

“There’s still that total competitive side to it, but I really enjoy what I do. So, I want to keep doing that as long as possible.”

Stosur will hope to transfer this positive perspective to sustained success on home soil during the Australian summer series.

The 2020 season started brightly at the Brisbane International, with a straight sets triumph over three-time Grand Slam champion Angelique Kerber.

STOSUR UPSETS KERBER IN BRISBANE.@bambamsam30 scores her first win over Angelique Kerber in almost five years, beating the three-time Grand Slam champion 7-6(5) 7-6(4) in the first round of the Brisbane International.@BrisbaneTennis | #GoAussies #BrisbaneTennis pic.twitter.com/7J83qJCuh5

Her best Australian Open result was fourth round finishes in 2006 and 2010.

“Sam achieved so much in her career but I really wished only one more thing for her – and that’s that the Australian public see her in full flight,” he said after presenting Stosur with the Spirit of Tennis Award in December.

“I think Sam has impressed Parisian crowds so any times in big matches, and she’s obviously beaten the greatest player of all time (Serena Williams) in New York.

“Of all the players we had here (at the Newcombe Medal) tonight I think Sam deserves to get one final big moment in Australia. And I really hope that happens.”