Captain Lleyton Hewitt is maintaining a level head as Team Australia prepares to meet Great Britain at the ATP Cup quarterfinals in Sydney. 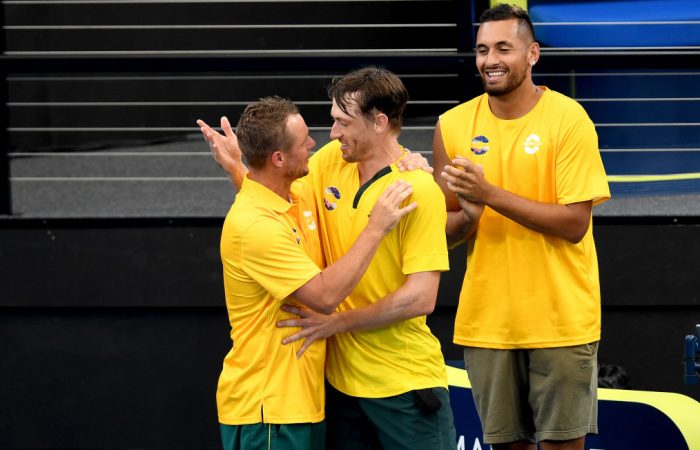 Australia may be sitting pretty as nine teams vie for the last four ATP Cup finals berths up for grabs on Wednesday but captain Lleyton Hewitt is not getting ahead of himself.

The hosts have emerged as one of the form outfits of the inaugural 24-team tournament after booking a Thursday quarterfinal berth against Great Britain in Sydney.

Australia completed their round robin matches in Brisbane on Tuesday night the way they had started them – with a 3-0 whitewash.

This time Australia put away Greece at Pat Rafter Arena despite resting their No.1 Alex de Minaur.

There was plenty for Hewitt to get excited about, with his team refusing to say die in what was a dead rubber for the hosts after they had already secured their finals berth.

Still, Hewitt did his best to keep a lid on expectations.

“We came here to Brisbane to do a job,” he said.

“The quality of tennis was fantastic (against Greece) and to be able to get through those …when the boys could have easily have taken their foot off the pedal was great.

“So I think everyone can be pretty proud.”

It was another perfect evening for 🇦🇺 #TeamAustralia on Day Five of the #ATPCup ✨https://t.co/BnIUxxpGFD

But asked if he now dared to dream of threatening for the ATP Cup title, Hewitt said: “We’ll only focus on Great Britain right now.

“We know that every match is going to get tougher from here on in. Plus now it’s knockout, so you got to be ready to go.

“It’s about the boys recovering as well as possible and getting ready for that challenge.”

Hewitt expected de Minaur to be ready for Great Britain while world No.30 Nick Kyrgios is expected to back up from his epic win over Greece’s Stefanos Tsitsipas despite missing their previous tie against Canada with a back complaint.

Novak Djokovic’s Serbia and Daniil Medvedev’s Russia were the only other teams to have confirmed finals berths ahead of the last day of round robin action on Wednesday.

Many scenarios can play out but the winner of Wednesday’s tie between Spain and Japan in Perth will win Group B and play finals on Friday.

In the other tie in Perth on Wednesday, minnows Georgia face Uruguay.

In Sydney, Austria take on Poland while Croatia battle Argentina.