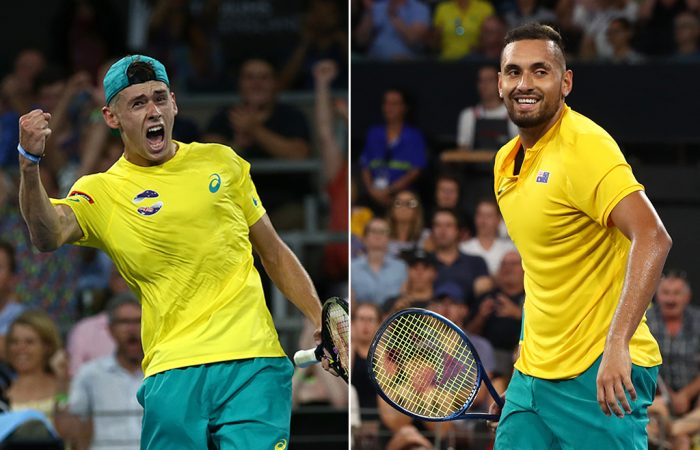 Zverev crumbled at the hands of De Minaur, who recovered from 6-4 4-2 down to secure Australia victory in Brisbane.

“It’s definitely up there. For me it’s another chance to represent my country,” said De Minaur, who beat Zverev for the first time in five career meetings.

“I had a battle (against Zverev) that was in the back of my mind from my Davis Cup debut (in February 2018), where it was a tough five-set match and got away from me, being a break up. So this one feels very very good.”

It followed a comprehensive 6-4 7-6(4) to Kyrgios over Jan-Lennard Struff, and set up an unbeatable 2-0 lead ahead of the final doubles clash on Friday night.

Australian captain Lleyton Hewitt was thrilled with the performances of his top two singles players.

“We’re in a really tough group — every match is gonna be extremely tough,” he said.

“Couldn’t be prouder of the boys today. Nick came out and played fantastic right from the start. Unbelievable serving display.

“Alex came out, did what he normally does and gives 100 per cent out there for his country, yet again. That’s going to go down as a great win in his career.”

Zverev was in control early, gaining a double break that De Minaur almost reeled in before the German won a 10-minute game to take the first set with his seventh set point.

But as the match wore on the 20-year-old turned the tables and Zverev felt the pinch in a contest that lasted two hours and 45 minutes.

He finished with 14 double faults and, with team captain Boris Becker watching on, brutally destroyed a racquet after surrendering an early break to lose the second set.

Ludicrous from @alexdeminaur! The Aussie lit up Pat Rafter Arena with this pass. And he's pushing Zverev all the way at the #ATPCup. pic.twitter.com/bsxPxA2v6I

De Minaur only accelerated from there, running everything down in a statement win ahead of this month’s Australian Open.

The top team from all six pools, plus the two next-best teams, will progress to the quarterfinals in Sydney later next week.

Kyrgios, ranked 30 in the world, put on a serving masterclass in the opening clash, delivering 20 aces against the world No.35 who had beaten him in their last outing.

Pledging $200 for every ace he serves this summer, the Australian admitted he had the victims of the bushfires firmly in mind whenever he stepped up to the line.

“Seeing my home town being on alert and having the worst air quality in the world, it’s tough to go out here and concentrate on tennis,” he said.

“The crowd was louder than usual (after an ace); it was on everyone’s minds, it was powerful.”

It was Kyrgios’ first outing since a recurring collarbone injury cut short his Davis Cup campaign for Australia in November’s finals in Madrid.

“Very excited to get our here again with the boys, playing for Australia,” he said on court.

“I’m just happy to kick it off with a win. Obviously I was a bit nervous coming out here, but … I was super excited to get out here — it was awesome.”