On the cusp of the top 200, in-form 21-year-old Max Purcell believes next year will be "bigger and better" after his most consistent season yet in 2019. 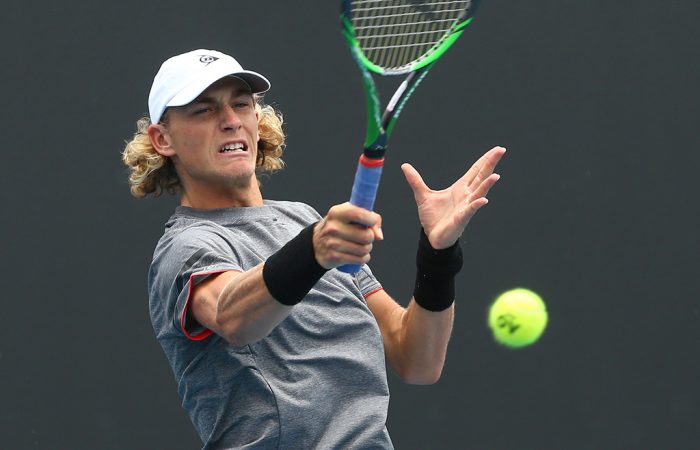 He may have attained career-best milestones in other seasons, but for Max Purcell, the year 2019 was unrivalled for its consistency.

The 21-year-old Sydneysider, who won his first and only Challenger title in 2016 before peaking at world No.208 in mid 2018, won almost 40 singles matches and did not once play below ATP Challenger level this year.

He also cracked the top 100 in doubles; playing with Luke Saville, he won seven ATP Challenger titles and posted a win-loss record of 42-15.

Purcell concluded his season with an impressive run to the AO Play-off final in December, where he was stopped by a resurgent JP Smith.

We spoke to Purcell following his semifinal victory over top seed Alex Bolt.

Tennis.com.au: You wouldn’t have played a ton of five-set tennis in your career so far. How were you preparing and training for this week of the Play-off? Are you confident in your physicality in this format?

Max Purcell: “I took a couple of weeks off tournaments to finish the year instead of playing out the full year; I took some time to train a bit more. I’ve been doing so much extra work in the gym, just running, longer time on court. And that’s been a little bit of the difference (for my success this week). And also just not wasting energy out there’s huge. I’ve been conserving my energy really well and just kind of switching on and switching off. I’ve played three sets and I still feel like I could play again, so that’s really confidence boosting.”

What’s been clicking for you tactically or technically in matches this week?

“I feel I’m moving forward well, I’m volleying well, I’m applying a lot of pressure and then I can also play from the back and defend when I need to. So I feel like maybe players are struggling to know how to play me. I’m just feeling really well with the ball on the strings right now, and I feel I can do a lot with it. Tennis is all about confidence, I feel, so as long as you can keep the confidence run going, there’s no reason why I can’t keep doing well.”

Your year has been a really good one — you’ve shaved 60 spots off your ranking and you’re getting close to cracking the top 200. How do you assess 2019, and what were the highlights?

“2019 was my most consistent year by far. I didn’t have any drops in results, I didn’t have three or four weeks where I didn’t win a match. It was just really consistent. And I was still working on a lot, working on my body throughout it. So I was really happy with where I managed to finish where I finished. And I can only feel like 2020 will be bigger and better.”

What are you targeting next year?

“I’d like to be able to at some point get to, or if not finish the year, top 100 in singles. And I guess keep my doubles ranking where it is, at about 80 in the world. I just want to get better every day.”

Is it difficult to combine the singles and the doubles? Particularly when you’re doing well in doubles, your ranking gets you into ATP events, so it can be challenging to get your singles and doubles schedules to align. How does that work for you?

“I had to choose a few doubles-only weeks this year, which I don’t regret, but I would have liked to have done more the singles side. But it was hard. And myself and Luke are doing so well in doubles, we felt we might as well give the doubles side a little bit more of a crack. And we got to our goal of getting into Wimbledon, in doubles main draw, so that was great. But you can get into all these doubles tournaments with your singles ranking, so I just want to get my singles ranking up there and then I won’t even have to worry about the doubles (ranking).”