Flying high after a breakthrough 2019 season, 24-year-old Belinda Woolcock has her sights set on playing more WTA events -- beginning with the Australian summer. 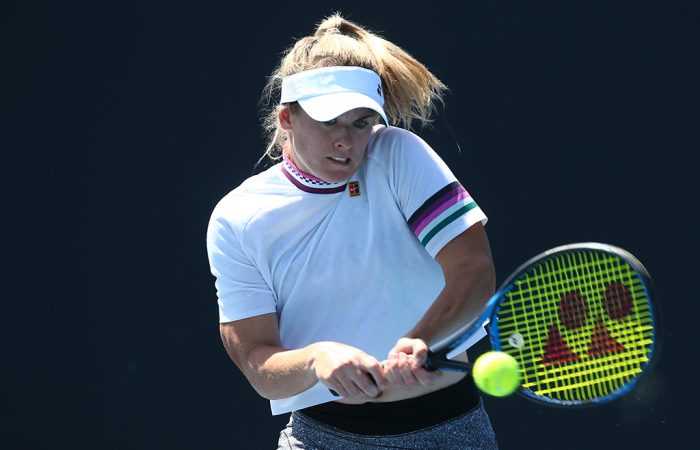 No Australian female player rose more in the WTA rankings in the past 12 months than Belinda Woolcock.

The 24-year-old Victorian, who ended 2018 at No.840, vaulted 547 places to No.293 in a career-best season that featured her first career singles title at the ITF 60K event in Burnie, part of the Australian Pro Tour.

It set the wheels in motion for a successful season during which Woolcock posted a win-loss record of 30-19; she also reached the ITF 15K final in Naples, USA and a further three quarterfinals.

Woolcock capped the year with a semifinal appearance at the AO Play-off tournament during the December Showdown, where eventual champion Arina Rodionova stopped her in three sets.

She chatted to tennis.com.au after winning her quarterfinal over top seed Maddison Inglis.

Tennis.com.au: You rose over 500 places in 2019 and you’re now in the top 300. What clicked for you this year and what were some of the highlights?

Belinda Woolcock: “It was definitely a tough year last year — there were a lot of things that I had to overcome. No.1 was being sidelined with my ACL. But last year I learned a lot off the court, and this year I think it’s paid off. I started the year really with nothing to lose, I was just really happy to be on the court again and healthy. And now I think just working hard off the court, doing the right things, and surrounding myself with the right team is the big thing.”

Who is in your team?

“I’ve now got a great physical conditioning trainer, Tennille, at Core Advantage in Oakleigh and they’ve really nailed it on the head with all the aspects off the court for me. It’s really given me the confidence that I can execute better on the court. Just aspects of my team, I think I’ve got on top of really well this year, and I think I’ve just become much more accountable and responsible. My coach is Claudia Forsyth at Kooyong, and the Kooyong Foundation supports me — I actually do a lot of my training there.”

At the start of your season you came through qualifying to win the 60K Burnie title. How important was that win to kick off your year and set up what you did for the rest of it?

“I actually really just wanted matches. It was tough conditions, a lot of wind in Burnie, but it actually suited me quite well, I was able to use the variety in my game really well. Progressing from that tournament, there were still a lot of things I needed to work on. My two trips in America — every tournament got better and better. And the Aussie Pro Tour just passed, which went for six weeks, that was a good block — I think I had really consistent, solid result. Now I think I’ve continued to work on the things from that block, and I’m hoping to still improve and get better from there.”

You said one of the keys for you this year was getting matches. So given you played around 50 matches in 2019, how are you feeling physically and mentally going into next year?

“From last year’s injury, I think I’ve done really well with just looking after things off the court after training and after matches. Even the mental side, making sure if I need to see a psychologist, do meditation, do mindfulness, if there’s just aspects … I definitely take my hat off to people who are aware of that aspect of sport, and make sure they address that. Because it is a stressful sport, and a lonely sport. So if you take charge of those things, it definitely pays off.”

Now that you’re in the top 300, it opens up new scheduling opportunities. What are you targeting in 2020, given you’re in a very different position coming into this season that you were last year?

“I’m really excited for the summer coming up — I’ve entered all the tournaments, such as Brisbane, Auckland, Hobart, Adelaide. I’m just hopeful that with my ranking that can get me into qualies. After that I would definitely play the remaining Aussie tournaments, so Burnie and Launceston. From there I’ll consider going overseas. I’m hoping next year will involve more WTAs and qualies of Slams, that’s the goal. Just keep chipping away and see how I go.”