Thanasi Kokkinakis declares he is feeling fit and ready for the 2020 season. 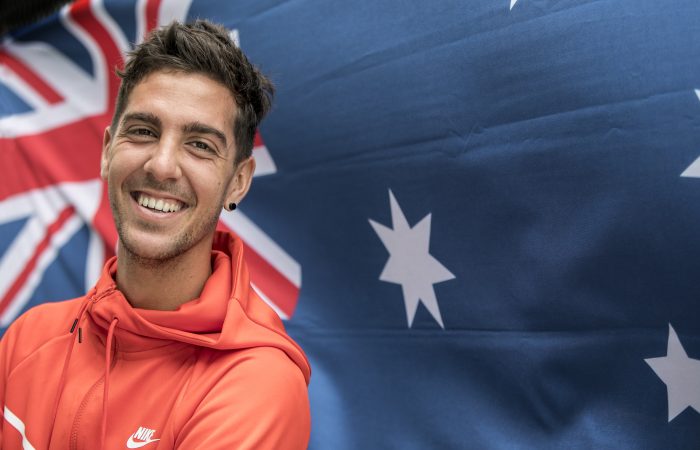 Thanasi Kokkinakis is feeling confident as he prepares for the 2020 season.

“I feel good. This is the healthiest I’ve been in a while,” the 23-year-old told tennis.com.au during a break from his pre-season training.

“It’s the first time I’ve really had a pre-season with no restrictions. Hopefully it stays this way coming into the first few tournaments of the year. I think I’m in a really good spot coming into next year.”

The South Australian’s rising confidence is positive news after a challenging run with injuries. A pectoral injury impacted his 2019 season, the fourth consecutive year he’s been unable to play a full schedule.

Kokkinakis admits he became his “own biggest opponent” as he struggled to maintain momentum during the testing period. Frustrations grew as self-belief faded in his body’s ability to handle matches.

From the nine tournaments he entered in 2019, he was unable to complete four of them due to injury. This included the Australian Open, where he retired in the opening round after winning three qualifying matches, and the US Open, where he withdrew with shoulder soreness ahead of a second-round clash with eventual champion Rafael Nadal after posting his first Grand Slam main draw win since 2015.

Kokkinakis, currently ranked No.199, has not played since making an ATP Challenger final in the United States in September. After cutting his season short to rehabilitate his lingering pectoral concern, he contemplated contesting last week’s AO Play-off.

“I was close (to playing). If it was a best-of-three event or maybe only best-of-five for the last round, I probably would have played,” he said.

“But I thought I’d take the time for the rest of the year to sort my pec out. I didn’t want to rush that process and play best-of-five sets too soon. I tried to do the best thing body wise, not just looking short-term for the Aussie Open, because I know it’s a long year ahead.”

That long-term focus has Kokkinakis, who achieved a career-high ranking of No.69 as a teenager in 2015, eyeing a return to the world’s top 100 for the first time since February 2016.

He showed promising signs in 2019 that this target is achievable – winning 20 of the 26 matches he completed and defeating Australian Open 2019 semifinalist Lucas Pouille to make his second career ATP-level quarterfinal in Los Cabos in July.

“My biggest goal is to stay healthy. I think my ranking will take care of itself when I do that,” says Kokkinakis.

“Obviously I want to get back inside the top 100 as soon as possible and I think the quickest way to do that for me is just to stay healthy. I only played a few events last year, and a couple of them I pulled out of, and I’m (ranked) around 200.

“So if I can play more tournaments and do as well as I did, I think I’m going to have a pretty high ranking hopefully.”

Kokkinakis plans to make his competitive return at an ATP Challenger tournament in Canberra in January. His attention then turns to the Australian Open, where he will need to qualify or receive a wildcard to make a fifth main-draw appearance.