We look back at a stellar 12 months for several of Australia's men in the ATP rankings -- and celebrate the biggest movers and improvers. 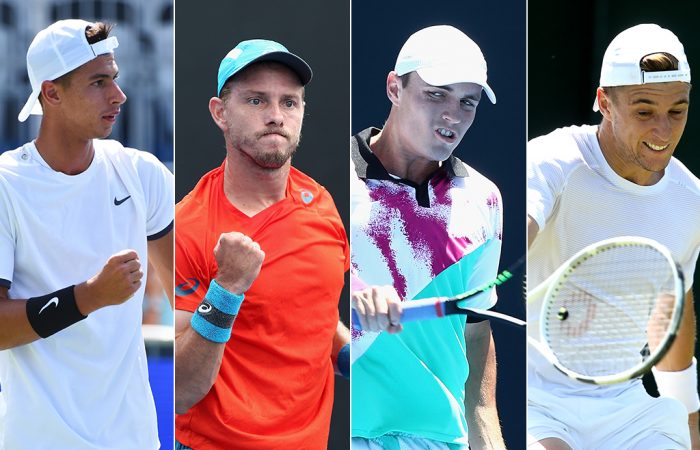 For the second year in succession, Australia had six men finish inside the year-end ATP top 100 in 2019.

And below them were several more Aussie men making rapid progress towards joining them in that elite bracket.

At all levels of the professional game — ATP Tour, Challenger Tour, ITF World Tennis Tour — Aussies enjoyed plenty of success in 2019, and improved their ranking considerably as a result when compared with 12 months earlier.

Chris O’Connell’s staggering rise was the most notable. Yet there was also the emergence of Alexei Popyrin, Andrew Harris and Aleksandar Vukic, the return of James Duckworth to the top 100, vast improvement for Harry Bourchier, a breakthrough for Rinky Hijikata and a heartwarming comeback for Blake Mott.

We celebrate those achievements, and many more, in this men’s year-end edition of “biggest movers”.

Excellent season for the 20-year-old, who on home soil won his first career ATP title in Sydney and then advanced to the third round of the Australian Open. Rebounded from an injury-induced dip to win titles two and three in Atlanta and Zhuhai respectively, while in between those there was a trip to the fourth round of the US Open, a career-best Slam result that also featured his first top-10 win (over Nishikori). Also reached the ATP 500 final in Basel — a result that saw him break into the top 20 — and closed the year by going undefeated in singles for Australia at the Davis Cup Finals.

This season marked a series of firsts for the 25-year-old Thompson; he notched his best ever Slam result by advancing to the third round at Roland Garros, after posting a career-best ATP Masters result via a fourth-round run in Miami. Excelled on grass — reached the final in ‘s-Hertogenbosch and semis in Antalya — and won more than 30 matches in 2019. Thompson also progressed to a further three ATP quarterfinals (Sydney, New York, Houston) and reached the Challenger final in April in Nanchang, China.

Popyrin performed brilliantly at the majors in 2019, winning his first-round matches at all four. He went as far as the third round at the Australian and US Opens, and cracked the top 100 in June around the time he qualified for the main draw at Wimbledon and went on to reach the second round. The Sydneysider, who won 37 matches and qualified for 10 tour-level events in 2019, recorded his best ATP result with a quarterfinal in Atlanta.

A heartwarming return to the top 100 for the injury-plagued Duckworth, who endured five surgeries in a 13-month span from January 2017 to January 2018. The 27-year-old won ATP Challenger titles in Bangkok, Baotou, Playford and Pune in 2019, the last of those helping him return to the top 100 and ensure direct entry into Australian Open 2020. Playing almost entirely on the Challenger circuit to rebuild his ranking — which fell outside the top 1,000 in mid 2018 — Duckworth won 52 matches this season.

No player won more professional matches in 2019 the O’Connell, whose incredible tally of 82 match victories helped him vault more than 1,000 places in the rankings in the past 12 months. After reaching 10 ITF Futures finals in the first seven months of the season — and winning three — O’Connell turned his attention to the ATP Challenger circuit and continued winning, hoisting trophies on clay in Cordenons, Italy and on the hard courts of Fairfield, California. A further two Challenger finals (Sibiu and Knoxville) helped push him to a career-high ranking and on the verge of the top 100, an even bigger achievement considering the illness and injury problems that halted his progress in 2017 and 2018.

Like Duckworth and O’Connell, Harris was able to excel once free by physical problems. The Victorian, who a few years ago came through the US college system, soared in 2019 after advancing to three ATP Challenger finals (in Chennai, Busan and Traralgon). Harris also came within one victory of qualifying for the main draw at Wimbledon and reached at least the quarterfinal stage of four other Challenger events to finish the year with 39 match wins.

It was a consistent year on the Challenger circuit for Purcell, who won 37 matches in 2019 and recorded his best result with a run to the final in Seoul, South Korea. Although he attained a career-high ranking of No.208 in mid 2018, this is the highest the 21-year-old has finished in the rankings to conclude a season.

The 22-year-old turned his season around after losing seven of his first eight matches, discovering form during April and May on the Challenger tour in Asia and notching back-to-back semifinals in South Korea (Busan, Gwangju). He later went on to reach the quarterfinals of the Lexington Challenger.

In his first full season on tour after graduating from the University of Illinois in 2018, Vukic came within a whisker of cracking the world’s top 250 after an impressive run on the ATP Challenger tour. His best results were semifinals in Savannah, US and Nur-Sultan, Kazakhstan, while earlier in the season he reached the ITF Futures final in Bakersfield, California.

The 23-year-old enjoyed an incredible season, slashing his ranking by more than 400 places after a scorching start that saw him win 21 of 26 matches — including back-to-back Pro Tour titles in Mornington — in the first three months of the season. The Tasmanian continued his momentum, picking up two more Futures titles (Singapore, Hengyang) and successfully transitioning to the Challenger circuit to close the year with 49 match wins.

The South Australian showed an encouraging return to form in 2019, with the high point in the first half of the season being a run to the semifinals at the Launceston Challenger. Yet there were more fruitful results at the back-end of the year, with the former world No.1 junior appearing in the Brisbane Pro Tour final and winning 14 of his last 19 matches.

Kelly flourished on home soil, winning Australian Pro Tour titles in Mildura, Brisbane and Toowoomba. Yet there was also success abroad for the 29-year-old, who won a Futures title in Singapore and reached a pair of finals in Hua Hin, Thailand. After dipping outside the top 500 in September, Kelly finished 2019 with plenty of momentum, winning 28 of his last 36 matches.

It was an stunning — if light — comeback season for Mott, who stepped away from tennis after the 2017 US Open and did not play for two years. In his comeback tournament in Cairns, the 23-year-old won the tournament, as well as his next in Darwin. Mott extended his winning streak to 12 before losing to Purcell in the third round of the Traralgon Challenger. In four tournaments, he went 14-2, and went from having no ranking to the verge of a top-500 return.

A final on grass at the Pro Tour event in Albury kick-started a career-best year for 20-year-old Romios, who also posted a semifinal finish in Cancun, Mexico and a quarterfinal in Jakarta, Indonesia — both ITF Futures events. He also progressed to the third round of the Chengdu Challenger in China.

Hijikata broke through for his first professional title at the 15K Futures events in Fayetteville, Arkansas, before a few weeks later advancing to the second round of the 25K Futures tournament in Waco, Texas after winning three rounds of qualifying. Elsewhere, he notched a semifinal at the Pro Tour event in Mornington in March and Futures quarterfinals in Japan and France.

The 25-year-old returned to the singles rankings this season for the first time since April 2018, helped by a purple patch in Mexico where at one stage he won 12 of 16 matches. Back on home soil, he progressed to the quarterfinals of the Cairns Pro Tour event.