After several years of setbacks, former world No.219 Christopher O'Connell believed he's a vastly improved player -- and it's evident in his rapidly-rising ranking. 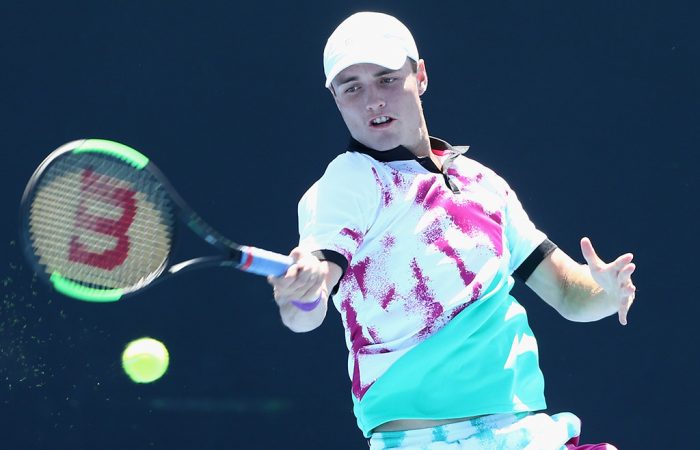 Finally free of the health problems that derailed a career trending upward, Christopher O’Connell’s time on tour this year has been a largely enjoyable existence.

Since April, the Australian has been in Europe chasing the sun – and ranking points – while navigating the new ITF Transition Tour. In the past five months, he has reached 10 Futures finals and won three of those, improving his ranking from outside the top 600 to No.313. Having since stepped up to the Challenger tour, his win-loss record in 2019 currently stands at 57-18.

He has undertaken this heavy workload in Turkey, Bosnia, Hungary and Italy on courts far removed from glamourous stops on the ATP Tour. Players often refer to the “grind” of these lower-rung tiers of professional tennis and describe the experience as isolating and lonely.

Yet O’Connell has thrived.

“I’ve been solo pretty much since April. I’ve learned to be good with my own company. I’m pretty introverted, so it’s not a huge problem for me to be on my own, most weeks — as sad as that sounds,” he laughed when speaking to tennis.com.au.

“I’m in a new place every single week, and hanging with all the different players from all different countries, so I quite enjoy it.

“I like to play my tennis in hotter conditions, so at the time, all those tournaments were the best in terms of weather. (And) I played all of these tournaments on clay, so it’s a bit softer on your body (than hard courts).

“I found I got into a rhythm and a groove and it was just a routine, waking up every morning and playing a match and doing it week in week out. It almost just came naturally to me.”

Home away from home

O’Connell is currently based in Belgrade, where he has access to physiotherapists, a trainer and tennis facilities after striking up a friendship with Serbian player Danilo Petrovic in recent years.

The Belgrade base is just a short flight from those tournament locations and has helped him remain in Europe for an uninterrupted period.

“I’ve learned quite a bit (of Serbian) so I understand quite a bit now,” O’Connell said. “I met a couple of Serbian players a few years ago when I was playing Challengers, and I told them my problem when I play in Europe – as an Australian we can’t fly back and forth, it’s just too far. So I need somewhere to base myself.

“(Petrovic) suggested I come train with him in Belgrade. It’s a completely different lifestyle to what I’m used to back home on the beach in Sydney. Belgrade is an interesting city, a different culture. And in a way — which is quite strange, because I’m completely Australian — every time I go back there it sort of feels like I’m going home a little bit. So it’s good to have that kind of feeling in your weeks off.”

After attaining a career-high ranking of No.219 in February 2017, the 25-year-old developed pneumonia, which lingered for several months and severely limited his ability to play and train. When he finally shook that, he developed knee tendonitis that kept him off court for the first six months of 2018.

He began competing regularly in the back half of that year, but in 2019 the ITF introduced its controversial Transition Tour. It meant that O’Connell could play, yet he had lost his ATP ranking and was forced onto the Futures tour in a bid to build his new ITF ranking high enough to return to the Challenger circuit.

The structural overhaul angered many players, and a petition circulated – attracting more than 15,000 signatures – railing against the changes.

Rather than focus on those politics, O’Connell instead decided to play a lot, win a lot, and leave the Transition Tour behind. That’s when he headed to Europe, where his stellar results followed.

“I decided that I’m going to try and do this, get this ITF ranking as high (as I could) as quick as possible by playing pretty much every single week,” he explained. “From the get-go I’ve been going well, pretty make much making a final every single week that I play, apart from a couple.

“(The changes) didn’t make me angry; I just accepted it and said this is how it’s going to be, and this is what I’ve got to do.

“And it’s sort of a blessing in disguise, because I’ve played about 70 matches at the Futures level and there’s still some good players floating around there. I’m very match-fit at the moment.

“It’s set me up for a great second half of the year, playing all the Challengers.”

Backlash to the Transition Tour was not in vain; in May the ITF announced it would once again award ATP and WTA ranking points at its $15,000 and $25,000 tournaments.

With points from those events (dating back to August 2018) retroactively added to players’ rankings, O’Connell in the first week of August shot back up to world No.316.

Despite his excellent form, the Aussie is aware rest breaks between tournaments are paramount after all the matches he has recently played.

“It’s hard to know when I need to have a rest, because my body is feeling great. (But) you need to mentally refresh, even if you don’t feel like you need to,” said O’Connell, who this week has advanced to the last 16 of the Cordenons Challenger in Italy.

“A tennis player learns so much each year by travelling and playing tournaments and I’m looking after my body so much more now, eating better than I ever have. I’m always looking for the extra percentages when I can do better.

“I feel like I’m a 10 times better player than I was a couple of years ago, even though I was having good results then and did have a high ranking.”

With few ranking points to defend, O’Connell is targeting the world’s top 250, which would allow him to enter Grand Slam qualifying draws in 2020.

“It would be nice to get to that (ranking) before the end of the year, so I’m in the Australian Open qualifying with no wildcards. And then go from there,” he said.

“It’s been a pretty rough couple of years for me. (But) players know that they have the level and the talent to get to a certain level. The talent never goes away.

“If you just keep persisting and try and stay healthy, then eventually it’s going to happen for you.”