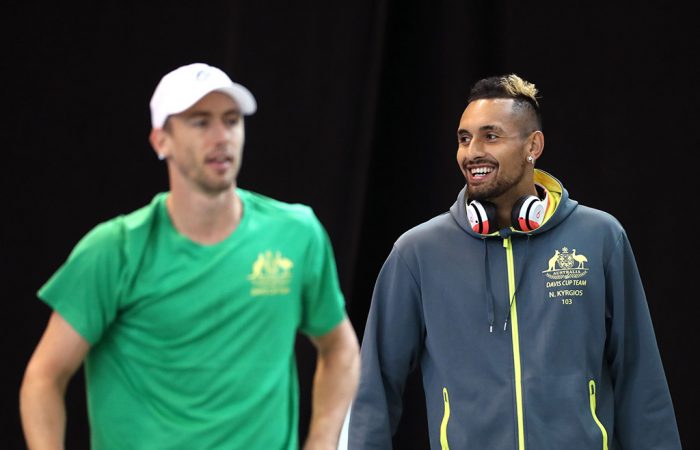 A focused Lleyton Hewitt has warned his players they face a stiff challenge to progress to the knock-out stages of the Davis Cup in Madrid.

Hewitt’s Australia side opens its campaign against Colombia, who at 18 are among the lower-ranked sides in the tournament.

Nick Kyrgios looks set to open the tie, which starts at 0400 (AEDT) on Wednesday against Colombia’s No.2 player Santiago Giraldo, who is ranked 278 in the world — 248 places below the Canberran.

World No.18 Alex de Minaur is then expected to meet Daniel Galan in the second match before top-ranked doubles pairing Robert Farah and Juan Sebastian Cabal take on the likely pairing of John Peers and either John Millman or Jordan Thompson.

“I don’t think there are any easy teams in the whole competition,” Hewitt said.

“It’s such a fine line between three matches instead of five per tie so every match is critical. In the group stages there is a chance for the runner-up to come through. It puts even more importance on the singles matches and even a dead rubber in the doubles.

“In terms of that it’s very exciting for the crowd and we are learning on the spot.

“The Davis Cup requires a different nerve and rankings get thrown out of the door. You need guys that are going to handle the pressure and expectation of playing for their country.”

After facing the South Americans Australia will take on Belgium on Thursday (0400 AEDT) a nation who have the wood over Australia in recent years.

The last time the two nations faced off two years ago in the World Group semifinal, Australia let slip a 2-1 lead to lose 3-2 with the veteran Steve Darcis and world No.11 David Goffin starring on the final day.

The pair once again spearhead the fourth-ranked side’s challenge and both prevailed in their singles matches on Monday.

Darcis beat Giraldo in straight sets but Goffin needed three to see off the gutsy Galan 6-3 3-6 6-3 as Belgium took an unassailable 2-0 lead.

Cabal and Farah earned what could be a crucial point for Colombia with a three-set victory in the doubles rubber over Sander Gille and Joran Vliegen.