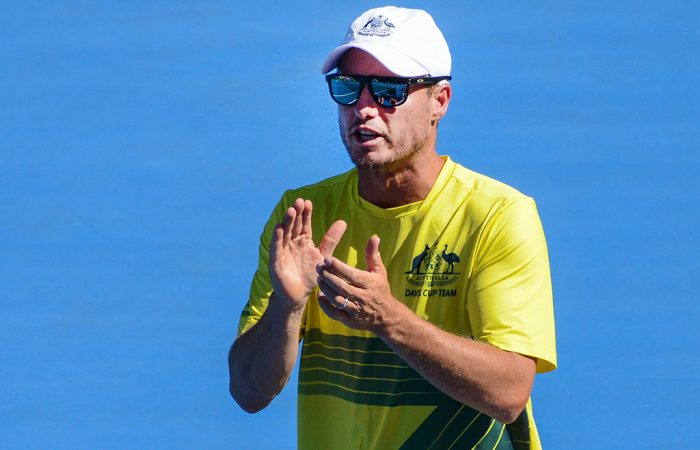 The Australian team of Alex de Minaur, Nick Kyrgios, John Millman, Jordan Thompson and John Peers will embark on the group stages of the revamped Davis Cup Finals in Madrid this week.

And Lleyton Hewitt believes it is the most talented he has assembled since taking on the Davis Cup captaincy in 2015.

“On paper it probably is the best, but paper doesn’t play,” he said.

“The Davis Cup requires a different nerve and rankings get thrown out of the door. You need guys that are going to handle the pressure and expectation of playing for their country.

“But I have full belief in my five guys. I am very confident, very happy and know they are going to go out there and play bloody well.”

Australian No.1 De Minaur enjoyed a superb finish to the season that saw him win the ATP title in Zhuhai in September and follow that up by reaching the finals of the Swiss Indoors in Basel and the ATP Next Gen Finals in Milan.

Kyrgios, who returned to the top 30 in early August and has stayed there ever since, captured two ATP 500 titles — Acapulco and Washington DC — and notched wins over five top-10 opponents in 2019.

World No.64 Thompson also has had a good year, bouncing back from a 2018 season during which he dropped out of the top 100 to post a fourth-round finish in Miami, a run to the third round at Roland Garros and a finals appearance on grass in ‘s-Hertogenbosch.

Last year’s US Open quarterfinalist Millman reached the ATP 500 final in Tokyo in October while Peers continued to thrive in doubles, reaching the Australian Open final with Henri Kontinen and winning the ATP Stuttgart title with Bruno Soares.

Australia has landed in Group D with Belgium and Colombia, who kick off proceedings when they meet on Monday.

Australia is in action against Colombia on Tuesday (Wednesday 4am AEDT) before facing the Belgians on Wednesday (Thursday 4am AEDT).