Australian No.1 Alex de Minaur ends his ATP season with defeat by Jannik Sinner at the Next Gen Finals. 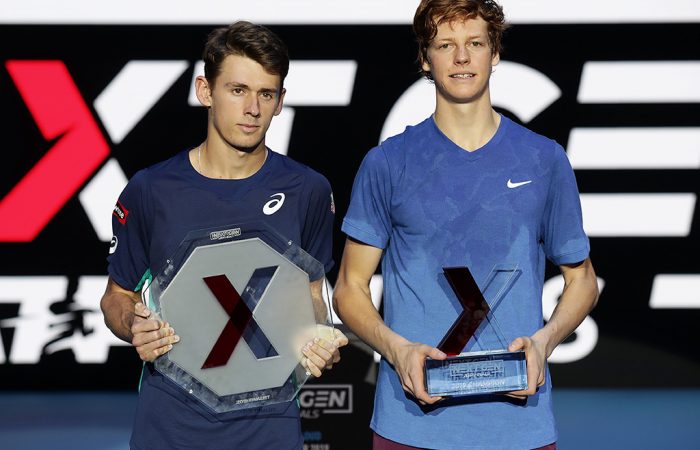 Australian No.1 Alex de Minaur was unable to capitalise on nine break-point chances as Italian teenager Jannik Sinner stormed to victory in the final of the Next Gen ATP Finals in Milan.

Tournament wildcard Sinner thumped winners with incredible regularity off both wings to secure his first ATP title 4-2 4-1 4-2, to the delight of the home crowd.

For the second consecutive year De Minaur rolled into the final with a perfect 4-0 record at the season-ending tournament for top under-21 players.

“I’m happy with my year and looking forward to next year.”

The title caps a fantastic season for the 18-year-old Sinner who opened the year at No.551 but is now the youngest player inside the Top 100, having risen to No.95.

The youngest player in the field this week, Sinner picked up $372,000 ($A542,000) from this week’s tournament, surpassing his career total before arriving in Milan.

“I don’t have words. I just tried to hit the ball,” Sinner told Amazon Prime.

“He (de Minaur) is an unbelievable player, he’s so fast. I tried to play my game, not make unforced errors, which today I didn’t make a lot so I’m very happy.”

Asked if it was his best ever performance, Sinner said: “Maybe yes. This week has been unbelievable.”