Alex de Minaur extends his winning run to four matches at the Next Gen ATP Finals and will face Italian teen star Jannik Sinner for the 21-and-under title. 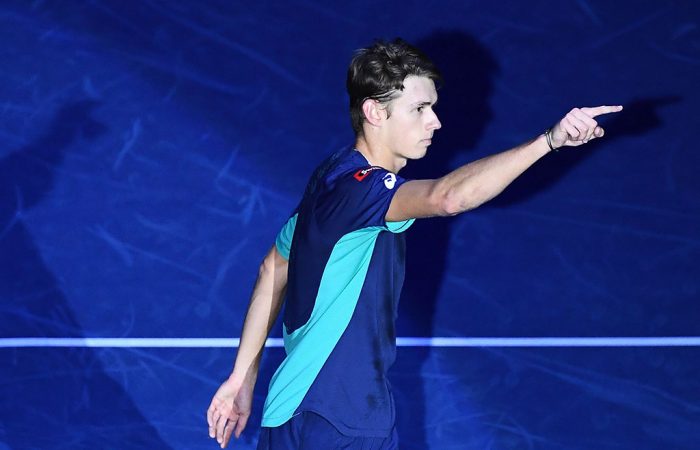 Australian No.1 Alex de Minaur has booked his spot in the decider of the Next Gen ATP Finals after beating American Francis Tiafoe in the semifinal in Milan.

Top-seeded De Minaur beat Tiafoe on Friday to reach his second successive final in Milan, where he will face Italian wildcard Jannik Sinner.

The Australian overcame second-seeded Tiafoe 4-2 4-1 0-4 4-2 in the season-ending tournament for top under-21 players,

The 20-year-old De Minaur largely dominated the match but had to recover from losing the third set to seal victory on his first match point when Tiafoe hit a forehand into the net.

“It’s never easy playing someone like Frances. He has immense firepower and he’s never going to give up,” said De Minaur, who has lost just one of his nine matches at the Next Gen Finals.

“I didn’t have my best third set, but I was able to bounce back and come up clutch in that last game.”

De Minaur and Tiafoe are good friends on the circuit and that was shown by the American giving De Minaur a friendly slap on the head as he walked off court after the defeat.

“It’s difficult, but easier in some ways,” De Minaur said about facing a friend.

“It’s easy because you know that no matter what happens on the court, you’re still going to be the best of friends. In the same manner, you’ve got to remember that you’re opponents.”

De Minaur, who is ranked No.18, will be looking for a fourth ATP Tour title after victories this year in Sydney, Atlanta and Zhuhai.

He lost the 2018 Next Gen final in Milan to Greece’s Stefanos Tsitsipas.

This time, Sinner will be his opponent in the tournament decider, after the 18-year-old overcame the challenge of Serb Miomir Kecmanovic 2-4 4-1 4-2 4-2 in the second semifinal.