De Minaur undefeated in Next Gen Finals round robin

Alex de Minaur goes 3-0 in round-robin play at the Next Gen ATP Finals after a commanding victory over Casper Ruud in Milan on Thursday. 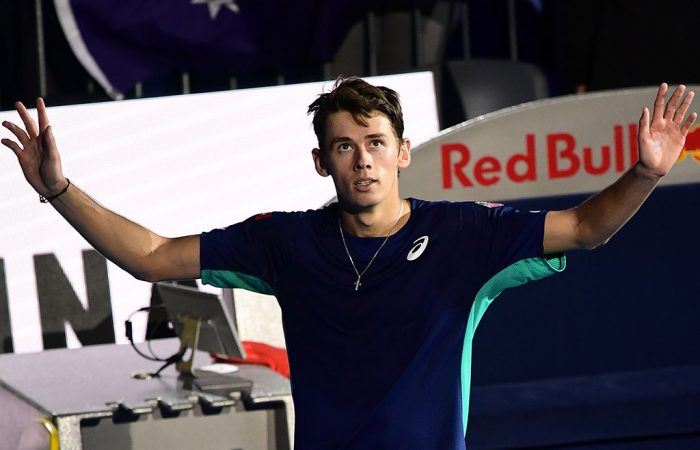 De Minaur is favourite to advance to his second successive decider at the 21-and-under event after cruising through group play unbeaten.

The Australian No.1 continued his impressive run when he powered past Ruud in straight sets, setting up a showdown with good friend Frances Tiafoe.

DMinuar, the world No.18, smashed 23 winners during the 4-1 4-0 4-2 victory, which eliminated his Norwegian opponent from the round-robin event.

“I knew from playing Casper before that he’d dictate any short ball without a purpose,” De Minaur said after his win which was clocked at 61 minutes.

“The game plan was to play on my own terms, play aggressively, play different styles of tennis and it sort of worked.

“The goal I had was any half-chance, go up and back myself at the net. I’m glad I was able to execute and worked out today. I’m looking forward to the semifinals.”

The victory ensured Sydneysider De Minaur, 20, who finished runner-up to Stefanos Tsitsipas at last year’s tournament, has gone through undefeated 3-0 in round-robin play for the second successive year.

De Minaur will play second-seeded Tiafoe on Friday after the American defeated Mikael Ymer 4-2 4-2 4-2 to secure second spot in his group.

“I wanted to see him in the final but unfortunately it has to be in the semis,” Tiafoe said of De Minaur.

“He’s a workhorse. He’s going to get every ball, keep every rally extremely long and make me beat him. I’m ready for the task.

“We’re going to go after each other, but we’ll still be great friends after.”

Kecmanovic will face 18-year-old Italian Jannik Sinner, the youngest player in the field, for a spot in the final.