Stefanos Tsitsipas proves too strong for Alex de Minaur at the Paris Masters, beating the young Aussie in straight sets to reach the quarterfinals. 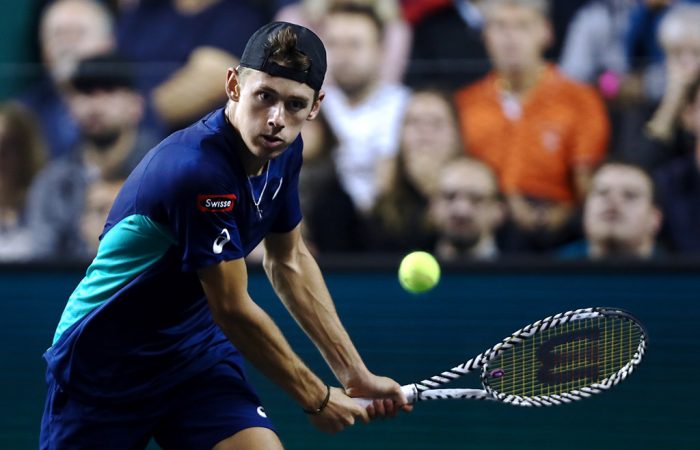 Australia’s Alex de Minaur has been knocked out of the Paris Masters after a 6-3 6-4 loss to Stefanos Tsitsipas.

It took 21-year-old Tsitsipas — who had 11 aces in the contest — 69 minutes to defeat De Minaur in the French capital, a result that saw him improve his head-to-head record against the young Aussie to 5-1.

Tsitsipas will now face four-time champion Novak Djokovic in the quarterfinals after the Serb scored his 50th ATP win of the season — a 7-6(7) 6-1 win against Kyle Edmund.

Tsitsipas’ victory was his 100th tour-level win in 160 matches, reaching the century of wins faster than seven of the other members of the top 10, excluding Nadal (137) and Djokovic (143).

De Minaur will now play the Next Gen ATP Finals in Milan next week.

Djokovic awaits Tsitsipas in the last eight, and the four-time champion is looking close to his best.

After needing seven set points to clinch the first set against Edmund, the top-ranked Serb reeled off six successive games in the second, finishing it off by breaking his British opponent to love with a two-handed backhand winner into the left corner.