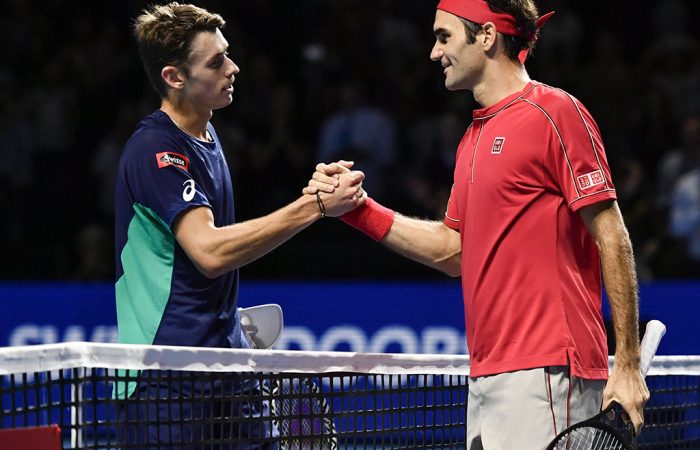 Roger Federer tipped “so many more things to come” for Alex de Minaur after putting Australia’s ambitious young gun firmly in his place with another tennis masterclass.

Federer clinched a record-extending 10th Swiss Indoors championship in his hometown of Basel with a crushing 6-2 6-2 victory over de Minaur.

The 38-year-old has now won 103 career singles titles to be six shy of Jimmy Connors’ all-time record – and exactly 100 more than de Minaur, who, at 20, is barely half the age of the 20-times grand slam champion.

“I was really hoping that Roger was going to get sick of winning here and give someone else a chance,” de Minaur said.

“Too good again. That was amazing.”

But, praising his opponent, Federer predicted: “So many more things to come for you. You are going up from here.”

Roger Federer in his finest form 💪

De Minaur had won all three of his finals this year, but was no match for Federer, who converted four of 10 break points and didn’t drop serve during the 68-minute clinic.

“It was fast but very nice, I think I played a great match,” an emotional Federer said after lifting the trophy.

The record win in Basel – where he once acted as a ball boy – was the second time he had won a tournament 10 times after achieving the feat in Halle in June.

While Federer claimed a fourth title of the season to go with Halle, Miami and Dubai, de Minaur can console himself with a rankings rise into the world’s top 20 for the first time on Monday.

“I thought Alex played a great tournament as well, and I think we both can be very happy,” Federer said.

“But what a moment for me to win my 10th here in my hometown of Basel.”

He and de Minaur, set to climb from 28th to 18th in the rankings, traded blows with a series of long baseline exchanges early on including an absorbing 39-shot rally when Federer led 2-1.

But the Swiss stepped up a gear to break de Minaur twice and take the opening set.

Federer was ruthless on his serve and retained his momentum and intensity in the second set, moving into a 3-0 lead after winning five games in a row to assume total control.

De Minaur’s defeat was his first loss in four title deciders this year, having won in Sydney, Atlanta and Zhuhai.

But, in another silver lining, he secured Australian No.1 status from ATP Cup teammate Nick Kyrgios heading into the bumper summer of tennis down under.