Alex de Minaur will contest his first match against Roger Federer in the Basel final. 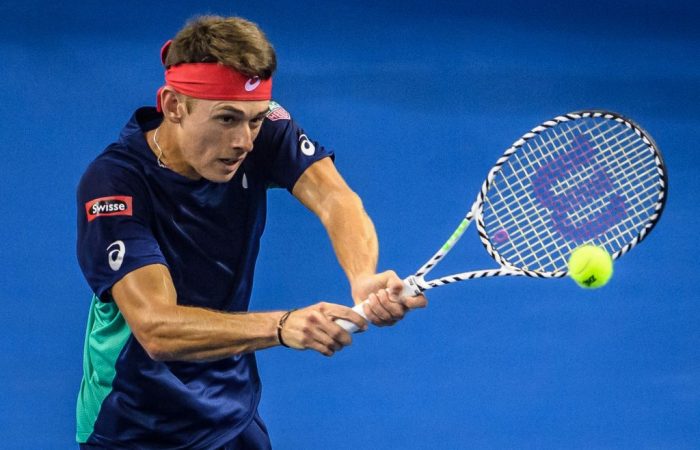 Alex de Minaur has beaten American Reilly Opelka in the Swiss Indoors semifinals to set up a decider with top seed Roger Federer.

The Australian advanced to his fourth ATP final of the season after beating Opelka 7-6(2) 6-7 (4) 7-6 (3) with break points in short supply in Basel on Saturday.

Both players dropped serve only once in a match that lasted more than two-and-a-half hours.

Despite Opelka firing 26 aces to De Minaur’s 14, it was the 20-year-old who prevailed in the tiebreaks to advance to his sixth ATP tour final and his fourth of the year, having already won titles in Sydney, Atlanta and Zhuhai.

#NextGenATP @alexdeminaur has reached his fourth final of the season 👏

In the other semifinal, Federer dispatched Greek third seed Stefanos Tsitsipas 6-4 6-4 for his 50th win of the season.

The win was a record 16th time Federer had won 50 ATP tour games in a season, and he has yet to drop a set at this year’s Basel tournament, where he has now won 23 consecutive matches over the years.

The 38-year-old will be looking to win his 10th title in his hometown when he faces De Minaur in Sunday’s final – the 157th tour-level final of the 20-times Grand Slam winner’s career.

“(The fans) enjoy when I’m playing good tennis and it pushes me to play even better, keep on trying every point and try to make something happen. That’s what you do with a home court advantage.”

The Swiss former world No.1 did not drop serve, with high win percentages on his first and second serve, and he broke the 21-year-old Tsitsipas twice in the 78-minute contest.

Federer, who had 28 winners, was also a constant threat when he approached the net, winning nine of 10 net points in the opening set alone.