Whether it be her sportsmanship, professionalism, achievements or distinct playing style, Sam Stosur’s influence has been felt throughout the Australian tennis ranks and beyond – and persists 20 years into her glittering playing career. 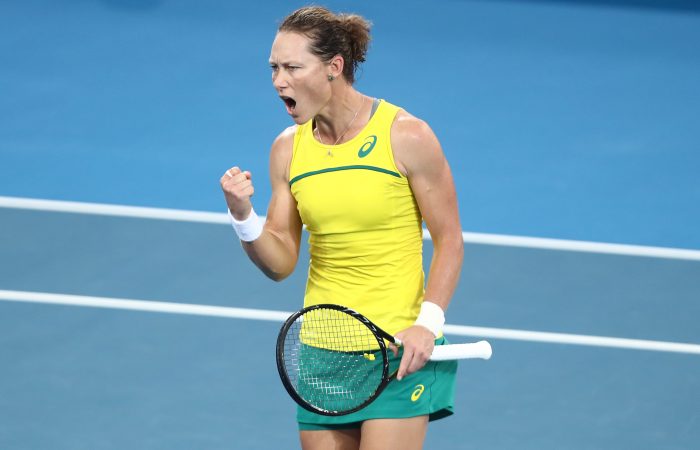 Ash Barty’s French Open victory in June 2019 was resonant, in many ways. Not only was it a landmark achievement for the 23-year-old herself, one that propelled her to superstardom in Australia. It also served to shine the spotlight on the achievements of another Queenslander – Sam Stosur.

Barty was cognisant of her countrywoman’s glittering tennis CV.

“It’s a special place for Australian players. Obviously Sam has done so well here in the past and she’s been so close before,” she said on court immediately after her Roland Garros victory.

It prompted this tweet from former doubles world No.1 Rennae Stubbs:

I love that @ashbar96 gave props to @bambamsam30 !!! Just classy and always thinking about the people that paved the way for her. Two genuinely good chicks! I guess they put some good stuff into the water in QLD. #sandgropers #ipswichgirl

“She didn’t have to say that, and if I’ve given one per cent of something that she’s been able to use to help her do that, then that’s great,” Stosur said.

Whatever impact Stosur may have had on Barty, their career trajectories have been remarkably similar. Both first flourished on the Grand Slam stage in doubles before a tennis hiatus – albeit for very different reasons – and both returned as even stronger forces in singles. And like Stosur a few years ago, Barty is now Australia’s Fed Cup spearhead, building a similarly impressive win-loss record in the team competition.

“Sam set the standard in singles for so many years,” Barty said. “She’s the ultimate professional – will cross every T and dot every I. She’s just amazing to be around.”

Daria Gavrilova has felt the 35-year-old Stosur’s impact even more strongly. Two years ago, the pair played out a thrilling final in Strasbourg that Stosur won in three sets. Speaking during the trophy presentation, Gavrilova sidled up to Stosur, put her arm around her friend and told her she was a great role model.

“I’ve always been close with Sam and she’s been my role model for a long time,” Gavrilova later said. “Sometimes I get emotional on court and she would comfort me and have a good chat.”

Whether it be her achievements and demeanour on the court, or professionalism and hard work off it, Stosur’s influence has been felt throughout Australia’s female tennis ranks. Observed Fed Cup captain Alicia Molik ahead of this year’s semifinal against Belarus in Brisbane: “You talk about longevity and professionalism – you’ve got your number one person sitting right here.”

It all comes down to this. Bring on the Fed Cup Final in November 🇦🇺 💚 💛 #GoAussies | @FedCup pic.twitter.com/fpGz319WX7

Stosur herself acknowledged the importance of having a countrywoman to look up to as she took her first steps on the professional tennis circuit.

“Having Alicia at the top of the sport when I was coming though, I know that definitely helps you drive (upwards),” she told Australian Tennis Magazine. “And now you see Ash there and it really does have an impact. It’s easy to say having a player at the top, it filters down – but it is actually true. Once you can actually feel that and be on the receiving end of that, it’s really noticeable.”

Esteemed tennis reporter Bud Collins was once heard discussing Stosur prior to the Australian’s singles breakthrough. His assessment? Nobody could hit a serve and a forehand that big and not have success.

It proved a perceptive comment. Stosur went on to win the 2011 US Open, the zenith of her enviable singles career – and a trophy earned in stunning style with defeat of the great Serena Williams in a one-sided final. She also reached quarterfinals in 2010 and 2012 at Flushing Meadows.

Yet at the French Open, she has been an even bigger, more consistent threat, despite not hoisting the Coupe Suzanne Lenglen. In 2009 she upset No.4 seed Elena Dementieva en route to her first Grand Slam semifinal. A year later, she navigated an extraordinarily tough path through the draw – beating former world No.1s Justine Henin and Jelena Jankovic and then-current No.1 Williams – to arrive in her first major final, where she fell to an inspired Francesca Schiavone. In 2012 and 2016, Stosur recorded her third and fourth semifinal appearances in Paris, a place where she has built a win-loss record of 40-16 – far outshining her 22-14 mark at the US Open.

Other notable achievements include a peak ranking of No.4 in February 2011, nine WTA singles titles, prestigious Premier 5-level finals in Rome, Toronto and Doha, and three straight appearances at the season-ending WTA Finals from 2010-12. In doubles, she is a six-time Grand Slam champion, with three trophies in women’s doubles and three in mixed.

As Collins noted, Stosur possesses significant power and weaponry. And she overwhelmed opponents with exactly that.

“Sam has an incredible kick serve; at her best she had one of the strongest second serves the women’s game has ever seen,” doubles legend Todd Woodbridge said. “Few other female players were able to match her serve-forehand one-two punch. It was this serve that she used so well to put herself in a position to dominate with her forehand.”

She executed this style to perfection in the 2010 Charleston final, a match Stosur cites as perhaps the best she has ever played. She thumped former world No.2 Vera Zvonareva 6-0 6-3, the score so lopsided at one point that the Russian – a Wimbledon and US Open finalist that same year – destroyed her racquet in a fit of dismayed rage, such was her lack of control over proceedings.

Stosur may not have influenced a generation of emerging players the way Chris Evert did with her two-handed backhand, or Monica Seles did with her intensity and grunting, or the Williams sisters did with their power and athleticism. And that’s because many players simply cannot replicate it.

Former world No.1 Jim Courier marvels at Stosur’s technique. “For my money, she’s the very first female player to harness the power of the racquets and the control of the strings,” he says. “Most of the women’s players now, they probably grew up emulating the Williams sisters, hitting the flatter ball. Lindsay Davenport was (also) a great flatball hitter.

“Stosur, for me, is a transformational player by the way she’s harnessed the technology. She’s the only one who can play true, Rafa-style clay-court tennis out here with the kick serve, with the big forehand that bites so much.”

That technique may be hard to reproduce, yet there are players whom Stosur has inspired in this space. American 21-year-old Caroline Dolehide was thrilled when her playing style – which helped her push world No.1 Simona Halep to the brink in the third round at Indian Wells in 2018 – drew comparisons with the Australian.

“Oh my gosh, that’s the biggest compliment I’ve ever heard. I grew up watching three players: Serena, Maria, and Sam,” she told WTA Insider, before revealing she’d marvelled at Stosur’s kick serve when she once practised on an adjacent court.

Astra Sharma, who this year has stormed into the world’s top 100, is another who cites Stosur’s influence.

“Definitely we both have that very heavy game,” said the 24-year-old from Perth. “I loved watching her when she was doing so well at the US Open that year. She was someone I kind of looked to as well, getting that spin, that heavy ball, because not many girls play like that.”

When Stosur won the Australian Open doubles title alongside China’s Zhang Shuai in January, she was surprised how much attention the result attracted.

Flying home to the Gold Coast for a few days’ break after her Australian Open triumph, Stosur received a card, passed to her by a flight attendant, from a passenger congratulating her on her career and for being a fantastic player to watch.

“It kind of struck me how much people did notice me winning the doubles. So that was amazing in itself, and in some ways a bit surprising, because I guess I hadn’t had that sort of feedback for a little while,” she laughed. “But it was a really pleasant surprise how much people actually did see that and take note.

“Getting of the plane coming back to Melbourne, I was crossing the street and a woman was like: ‘I love watching you play, thank you for all that you do!’ That also happened a few times on the Gold Coast, and then this, in the space of three or four days. And I’m like, far out, this is really nice!”

“Everyone loves a winner, no matter what you behave like. But (comments have) always been about sportsmanship, or what I’ve done for tennis here, or being a great ambassador, that sort of thing.

“I think for anyone to want to take the time to say that, I think that’s pretty good, because you’ve obviously impacted them. And ‘impacted’ could be that they just enjoyed watching your match for 10 minutes, or their kid likes playing tennis.

“You don’t know what that impact actually is, but I think that’s something pretty special to have. And even now in my career, it still kind of makes me step back a little and be like, ‘oh, that’s nice’.”

To read the full article, see the October-November edition of Australian Tennis Magazine.