Sanders back with a win in Bendigo

Two years after playing her last professional singles match in Bendigo, Storm Sanders is injury-free and back there in the winner’s circle. 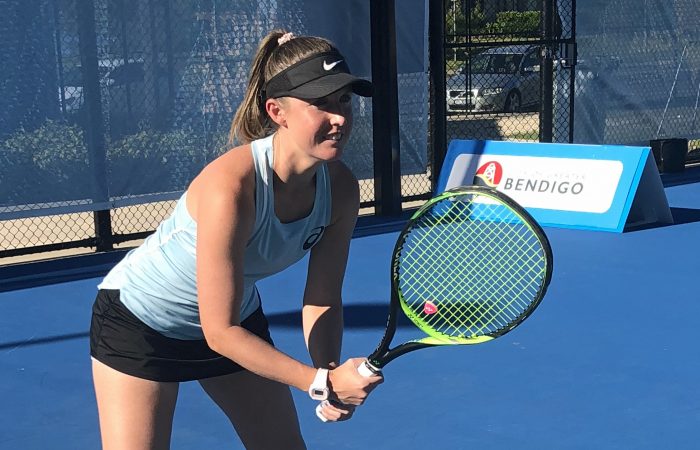 Storm Sanders reached the main draw of the Bendigo International on Tuesday, in her first professional singles outing in nearly two years.

“It’s nice to come out and enjoy it again, play two good matches, and swing freely. I’m putting no pressure on myself. Winning is definitely a bonus though,” Sanders, 25, said after convincingly defeating New Zealander Emily Fanning 6-1 6-2.

The West Australian former world No.202 played her last singles match at the same venue, back in 2017.

“I started getting some shoulder pain which got more intense,” she said. “I played the Aussie Open that year just focusing on doubles, but after that I stopped played completely and was basically out for all of 2018.

“I didn’t hit a ball for about nine months. I was in day-to-day pain for a while but it began feeling better eventually, so I started practising and then playing doubles again in February this year.”

Ranked a career-high world No.63 in doubles with a maiden WTA title at Nottingham in her pocket around the time the injury occurred, Sanders initially worked on getting her doubles ranking back up.

“I’ve been practising on the singles court during the year as well though, with a goal of playing Bendigo. So, everything is going well,” she said.

“I want to try my singles out again. It’s been a long time but I’m feeling fit and healthy, hitting the ball well. I think I can go further than I did when I was playing last and I feel like I have unfinished business.”

Sanders faces experienced Slovak Zuzana Zlochova in the opening round on Wednesday. “She’s a tricky player. I’ll just go out and do my thing, compete really hard,” Sanders said.

Despite the long hiatus, Sanders is looking at her journey off court as a blessing in disguise.

“I finished my psychology degree, did a lot of different things I wouldn’t have been able to do otherwise,” she said. “So I feel like I grew as a player by not playing.”

Bendigo’s No.1 seed Priscilla Hon – Sanders’ doubles partner this week – will open her campaign on Tuesday alongside other top-seeded Australians including Lizette Cabrera, Maddison Inglis and Destanee Aiava.