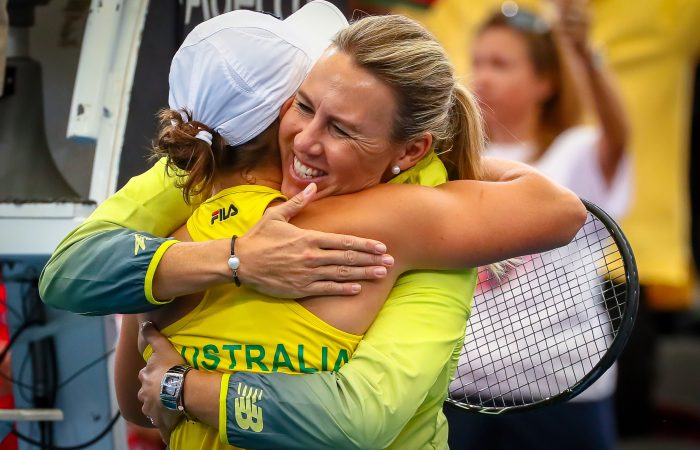 Only four Australians – and one woman, Margaret Court – have captained the nation to a Fed Cup title. Alicia Molik has the chance to join this elite group when she leads Australia into the 2019 final against France.

The former world No.8 spoke to Australian Tennis Magazine about her role and what a Fed Cup victory would mean.

ATM: Have you found the Fed Cup captain role rewarding?
Molik: It is rewarding that our players want to represent their country and take the opportunity to be role models for the next generation seriously. The incredible staff I work with possess great knowledge, experience and skills. I feel very lucky to be in their company and to collaborate during Fed Cup ties.

What is the most challenging part of the role?
Ensuring perfect preparation in the lead-up to ties. Each player has individual needs in terms of workload and training to maximise success. Perfect preparation does not stop on the court – a lot of the time it is having order around training times, rest time and listening to what a player feels they need.

Are you more nervous sitting on the sideline as captain, compared to when you played?
I got more nervous playing. It took me many years to control nerves and anxiety on the court. I’ve lost so many matches because of those, as well as self-doubt. Sitting on the side of the court, I’m calmer because I know the player has, more than likely, had as close to perfect preparation as possible.

How would your team members describe you?
As an affable and approachable person. I love to share a joke and have a good laugh, but I equally like to be incredibly professional when it comes to training and the competitive environment. It is a balance I try and find, knowing there needs to be one. I definitely do have high standards in work ethic.

What do you enjoy most about being a mentor?
I feed off the satisfaction from making someone attain more skills and understanding of their own game. It is about encouraging someone to change for the better and explore their potential. Coaching doesn’t stop on the court. For me, it’s about being a role model, honest and always upbeat for the player. It extends to educating players on professionalism on and off the court, being organised, self-sufficient and independent.

I was fortunate to have so many wonderful coaches through my path in tennis. From my local club, to South Australian state squads to senior professional tennis. My first coach, Kevin Swanson, taught me to kick serve when I was eight. Graeme Neville used to make me fill out a diary with my training goals when I was 10 and hold me accountable. Roger Tyzzer created a training environment you never wanted to miss. Chris Kachel, in my Australian Institute of Sport days, taught me you could never lob high enough. David Taylor made me believe more and recognise my strengths, taking me to No.8 in the world.

I learnt so much from many different coaches. They all had their own way and inspired me to want to stay involved in the sport as a coach too.

What is your favourite Fed Cup memory?
I hope it is around the corner in November in the Fed Cup final against France! There are so, so many – the fun times on and off the court, travelling all over the world together and competing. There’s absolutely nothing like it. All my fondest memories from tennis are of being in a team. Forever friendships are formed through team bonds with players and staff over many years and through all the ups and downs.

Why does Australia deserve to win the Fed Cup title?
We want to win the Fed Cup. We know how to win, what makes us win, but truly I don’t think anyone deserves to win a tennis match. For our players, it’s about being resilient under pressure and accepting the tough moments. I see the final as a continuation of our Fed Cup year. We don’t need to change – we need to hold ourselves to the same standards and not reinvent the wheel because it’s the final. It’s a privilege and we have earned the right to be there.

What would winning the Fed Cup title mean?
Winning the Fed Cup would definitely be special – and with perfect preparation must come perfect celebration! It would mean each team player has achieved something historic for the rest of their lives. They will forever be part of this special group. Winning it hopefully also means more young primary school kids bug their parents to take them to tennis a few more times a week.

To read the full interview, see the October-November edition of Australian Tennis Magazine.