John Millman is through to the quarterfinals of the ATP Rakuten Open in Tokyo after a commanding win over Lloyd Harris. Jordan Thompson fell to Japan’s Taro Daniel in an earlier match. 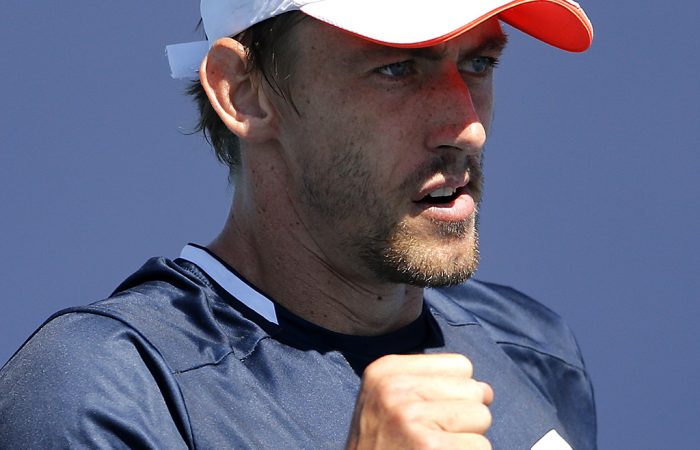 John Millman progressed to his fourth ATP quarterfinal of 2019 after a dominant performance against South Africa’s Lloyd Harris.

Earlier on Thursday, fellow Australian Jordan Thompson fell 6-4 7-6(3) to Japanese wildcard Taro Daniel, who in the opening round stunned No.2 seed Borna Coric.

Taro will next face Millman for a place in the semifinals of the ATP 500-level tournament on hard courts.

Millman, a qualifier in Tokyo, has now won four straight matches in the Japanese capital. And he has won nine of his past 10 matches, a run that also includes the ATP Challenger title in Kaohsiung, Chinese Taipei.

Ranked No.95 less than a month ago, Millman is projected to rise to No.74 in next week’s rankings – and higher should he continue his winning ways in Tokyo.

He out-served the big-serving Harris, who was no doubt a step slow after his bruising three-hour encounter 24 hours earlier against another Australian in Alex de Minaur.

“I was really happy with how I played. I knew Lloyd was going to have a tough backup. That match yesterday, I watched,” Millman told atptour.com.

“Obviously I’m a massive admirer of fellow countryman Alex de Minaur [whom Lloyd beat] and I watched that game and it was so physical, so I really wanted to reduce those unforced errors, make Lloyd have to work for every single point and try to neutralise that serve, because we know it’s a cannon.”

Millman finished the match with an 81% success rate on first serve points, and he broke the South African four times en route to victory.

He was looking forward to a quarterfinal stoush with Daniel on the tournament’s centre court.

“I got to play a match here [on Colosseum] in qualifying against Tatsuma, so I kind of knew what to expect. It’s quite blustery. When you actually get onto the court, you feel a wind there that you might not feel from the stands or outside,” Millman said.

“But it’s a nice court, it’s set up very nicely. The amount of the support they get out there, a lot of the seats are filled up and that makes it a good atmosphere to play tennis in.

“What makes (Daniel) such a good tennis player is how much of a competitor he is. He’s been ultra competitive and so impressive in his first couple of rounds against Borna Coric and then beating Jordan Thompson today.

“So I’m expecting a really tough, physical match. That’s what you expect when you play Taro and hopefully I can produce some good tennis.”

Thompson, meanwhile, did not generate a single break point against Daniel, who broke Thompson in the very first game to set the tone for the encounter.

Although the Sydneysider fought hard and made the second set a tighter contest, he fell behind 5-1 in the tiebreak and was unable to recover much ground.