The Junior Davis Cup Finals are underway this week in Orlando, Florida. 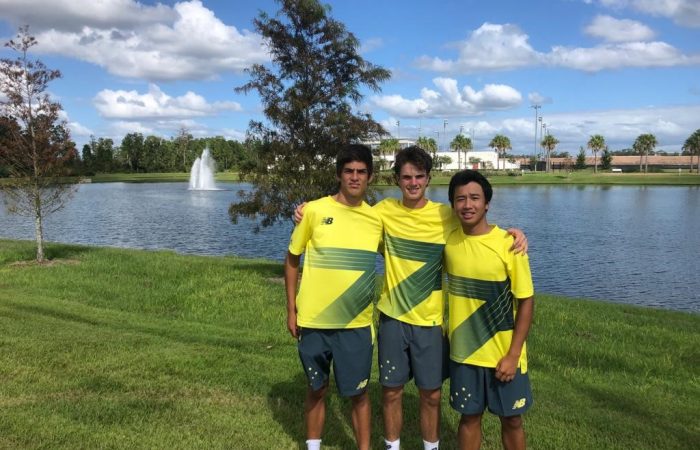 Australia’s top 16/u players Cooper White (Vic), Philip Sekulic (Qld) and Edward Vo (SA) will represent Australia at the Junior Davis Cup Finals which are underway in the USA this week.

The competition will run from 24-30 September at the USTA National Campus in Orlando, Florida where the team will aim to take out the prestigious Junior Davis Cup title for Australia for the first time since 2009.

The international teams competition is a major stepping stone for junior stars hoping to one day represent Australia on a professional level, and an important opportunity for our players to compete against the world’s best junior athletes with the top 16 nations earning selection into the Finals.

“All Australian tennis players feel an immense sense of pride when getting to represent their country, and I know that Cooper, Philip and Edward have been putting in the preparation and are really looking forward to this opportunity,” Bernhard Goerlitz, Australian Junior Davis Cup Captain said.

“The team has had a great training week in Boca Raton at the Evert Tennis Academy and also received a motivation video from some of our current and former Davis Cup legends, which helped highlight the significance of what it means to represent your country.”

“The competition is a great experience for the players, you have 16 of the world’s best junior tennis nations all competing for their country and Junior Davis Cup title so it’s a great opportunity for us to benchmark where we are at on a global stage.

“It’s a great achievement for the boys to first qualify as a team for the Junior Davis Cup Finals, and also be selected in the team and I’m sure each player will commit themselves one-hundred-percent on-and-off court.”

Australia, seeded sixth, will first face competition from Paraguay, Egypt and [4] Serbia after being drawn in Pool C. The top two teams from each of the four pools will qualify for the elimination quarterfinal stage at the Finals.