Stosur: “good results can be just around the corner”

Despite a lean year during which she has slipped outside the top 100, Sam Stosur says she never stopped believing she could produce better form and results -- and that's happened this week in Guangzhou. 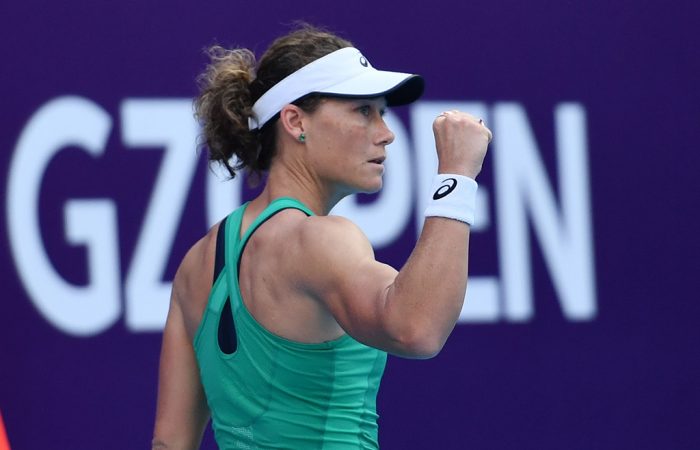 Sam Stosur’s victory over Nina Stojanovic on Thursday evening in Guangzhou was a breakthrough performance on several levels.

The 6-2 7-6(1) win sent the Australian into her first singles semifinal of 2019 and marks just the second time she has won three consecutive matches this season.

And, after slipping as low as world No.139 earlier this month, Stosur is also projected to rise to 103rd next week — putting her back in contention for direct entry into January’s Australian Open.

“It’s obviously been a tough year so to come here and make a semi is really pleasing,” the 35-year-old told tennis.com.au.

“I don’t know (what’s clicking this week). You’ve always got to believe it’s going to come back. You keep always doing the right things and training and practising the way you should.

“It’s certainly not easy and I’m very, very pleased; I’ve had close matches (this week) where things could have gone the other way.

“It’s a reminder that good results can be just around the corner if you just keep believing in yourself.”

Indeed, Stosur’s belief was put to the test in a big way against Stojanovic, who had beaten the Australian in straight sets just last week in Nanchang and who forged ahead 5-0, 40-15 in the second set of their Guangzhou quarterfinal.

It was both an impressive physical and mental effort, given just 24 hours earlier she had battled for two hours and 35 minutes to beat Bernarda Pera in oppressively hot and humid conditions in the southern Chinese city.

“In the second set (against Stojanovic) there were a couple of longer points and then it kind of hit me – I felt everything go flat and I lost all my energy and that continued for a few games,” Stosur revealed.

“I’d played singles and then doubles yesterday – I didn’t go on (for doubles) until 10.30pm and didn’t get to bed until 2am. But I guess it’s just sport, and the adrenaline kicks in.

“To be honest I was almost preparing for a third set and wanted to try and hold at least once in that second set to break some of that momentum, and try and be serving first in that third set — not that I was giving up on it, but chances are (slim at that point).”

Stosur said she had learned a lot from her meeting with Stojanovic last week, having never before played the Serb. And this time around, she felt she simply played a lot better.

“I just kept plugging away. I don’t think she played great service game at 5-1, and I thought ‘there’s something up with her here’,” Stosur said.

“I kind of sensed those moments where she was missing a few and when I needed to step up. I tried to play and win as many points as possible, and played a really good tiebreak.

“I guess just being a little bit relaxed about it and going point by point helped.”

The victory sets up a semifinal meeting with Viktorija Golubic, who upset Stosur’s doubles partner and fourth seed Zhang Shuai in three sets.

This will be their first meeting.

A win over Golubic — currently ranked 56 places higher, at No.73 — would send Stosur through to her first final in nearly two-and-a-half years (Strasbourg, May 2017) and would likely boost her ranking back inside the top 100.