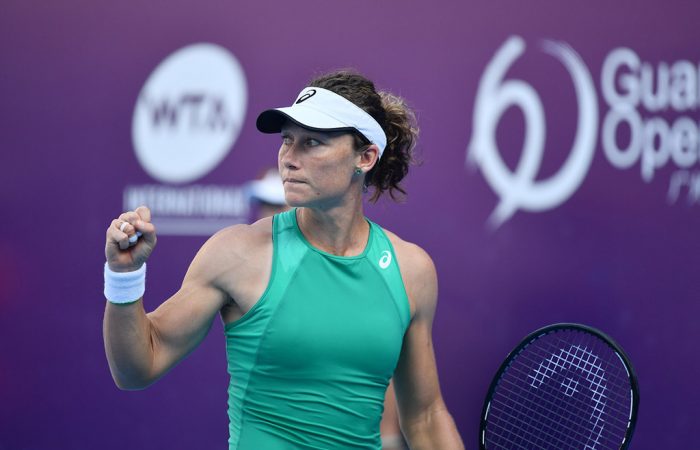 Sam Stosur is into her first WTA singles final in over two years.

The 35-year-old scored a 2-6 7-6(4) 6-1 victory over Switzerland’s Viktorija Golubic to advance to the final in Guangzhou.

Stosur, a wildcard entry competing in her first semifinal of the season, overcame a slow start and needed two hours and 17 minutes to record the hard-fought win.

Golubic started the match well to put the pressure on her Australian opponent early. The world No.73, who landed 90 per cent of her first serves in the opening set, took the opener 6-2.

Stosur lifted in the second set, breaking in the fourth game with a backhand winner to take a 3-1 lead. She served for the set at 5-3, but was broken.

Coach Rennae Stubbs pleaded with Stosur to ‘find the joy’ during an on-court coaching timeout – but with the momentum back in her favour, Golubic leveled the set at 5-all.

Stosur showed her fighting spirit – holding serve then earning two set points on Golubic’s serve in the 12th game, but was unable to capitalise as her Swiss opponent forced the set into a tiebreak.

The Australian showed her experience in the tiebreak, taking control of the points to race to a 5-1 lead and hold firm to level the match.

Breaks were traded early in the deciding set, with both players desperate to gain control. Stosur eventually held in the fourth game and from there, stormed through the final set to seal victory.

“She’s really tough to play against, so really happy to get through,” Stosur said.

“To make it to the final, I’m very happy. I’ll give it my best shot tomorrow.”

Stosur is looking to claim a 10th career title, and first since winning on Strasbourg clay in May 2017. She faces either American Sofia Kenin or Russian Anna Blinkova in the final.

The No.129-ranked Stosur will now return to the world’s top 100 next week – and could climb as high as No.83 if she wins the title.