Stosur fights through to Guangzhou quarters

Sam Stosur reaches her second quarterfinal of 2019 after a come-from-behind victory over Bernarda Pera at the WTA event in Guangzhou. 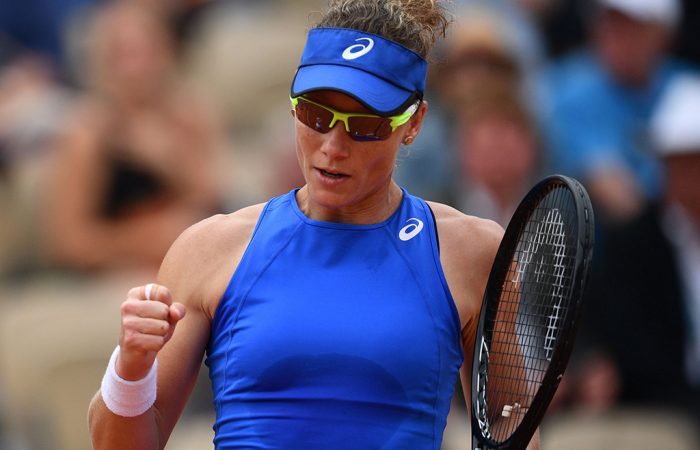 Sam Stosur is through to just her second quarterfinal of 2019 after a nail-biting win over American Brenda Pera in Guangzhou on Wednesday.

Stosur trailed by a break in the deciding set before clinching a 6-4 1-6 7-6(5) win on her fifth match point after two hours and 35 minutes.

The win sets up a rematch with Nina Stojanovic, who beat Stosur just last week in the second round of the WTA tournament in Nanchang.

Stosur, a wildcard into the main draw, also reached the quarterfinals in Lausanne, marking the deepest she has gone in 19 events this season.

“It feels great to be a quarterfinalist again,” she told tennis.com.au. “Most importantly though to be playing good tennis and feeling good out there. I’m just so pleased I’ve given myself another opportunity.”

Stosur was broken early in the first set to fall behind 3-1 before winning five of the next six games against an increasingly error-prone Pera.

She then broke immediately in the second set to lead by a set and a break — only to lose six straight games.

Stosur, currently ranked 129th, had her serve broken in the third game of the final set to trail 2-1, and Pera then moved ahead 40-15 in her next service game. But Stosur dug in, breaking back to level at 2-2.

From there, the two players could barely be separated — the only difference was that Stosur appeared far the fitter and fresher player in sapping hot and humid conditions.

“It is so hot here and the humidity also really takes it out of you,” Stosur said of the 34-degree temperatures.

“Every day I’ve been in China has been tough conditions like this but I think I’m coping well and I actually felt good out there this afternoon. I was ready to keep going and flighting until the very last point.”

Those fighting qualities are what saved her.

Pera arrived at break point in the ninth game, which if converted would have given her a 5-4 lead and a chance to serve for the match.

Yet Stosur erased it with a vicious body-serve that jammed the American and forced a return error.

Later, having held for a 6-5 lead, Stosur earned four match points in an epic 12th game, only for Pera to save them all with bold, aggressive play.

On the third of those match points, Pera played a shot that was flying well long, until it hit Stosur’s foot on the full — costing the Australian the point.

“All I could do was laugh about the ball hitting my foot on match point,” Stosur said.

“All I was thinking was to run to the open court to cover her backhand, and she went more (up the) middle and I couldn’t get my foot out of the way.

“I just thought, OK well that’s crazy, won’t probably happen ever again to me. So just try and get another match point (laughter).”

She eventually did, keeping her nose in front throughout the majority of the third-set tiebreak and sealing victory when Pera missed a final shot.