Stosur, now working with Stubbs, into US Open mixed quarters

Sam Stosur, who is now being coached by good friend and former Australian pro Rennae Stubbs, reaches the quarterfinals of the US Open mixed doubles event with Rajeev Ram. 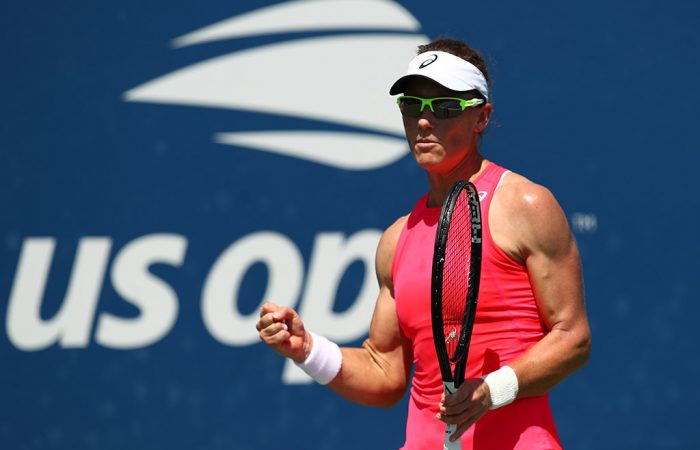 Stosur and Ram, the No.3 seeds, accounted for Belgian-French duo Kirsten Flipkens and Edouard Roger-Vasselin 7-6(2) 7-5.

In the first round, Stosur and Ram beat Kaitlyn Christian and Jamie Cerretani in straight sets.

They next play sixth seeds Demi Schuurs and Henri Kontinen for a place in the semifinals, where Bethanie Mattek-Sands and Jamie Murray await.

Stubbs, a former world No.1 and six-time major champion, revealed on The Racquet Magazine Podcast in the lead-up to the US Open that she had recently begun coaching her friend.

“I got a call a couple of weeks ago from my old buddy Sam Stosur; she’s just looking to get a little bit of advice, a little bit of help throughout the rest of this year, see if she can get her singles ranking back. We’ll give it a go and see what we can come up with together,” Stubbs said.

“She just wanted to have someone she trusted and respected to help her out a little bit through the end of the year.

“So we’ll see what we can do; hopefully it will result in some good results for Sam in singles over the next few months. And if not, she’ll re-evaluate where she’s at.

“And obviously also she’s in fourth or fifth in the race in doubles, so I’m handy to have around as far as helping with doubles as well.”

Stosur’s singles ranking has slipped to 136th, and most recently she fell in the first round of the singles event at Flushing Meadows to Ekaterina Alexandrova in straight sets.

She has risen to No.13 in doubles, and she and Chinese partner Shuai Zhang are currently sixth in the WTA Race to Shenzhen, with the pair in 2019 winning the Australian Open, reaching the Miami final and and posting a quarterfinal finish at Roland Garros.

Stosur and Zhang, despite being the No.6 seeds in New York, were stunned in the first round 1-6 6-4 6-4 by Ellen Perez and Danielle Collins.

Prior to leaving for the United States in August, Stosur told tennis.com.au that qualifying for the season-ended championship in Shenzhen was a major goal.

“From US Open go to Nanchang, then Wuhan, Beijing, Hong Kong, (and then) I’ll come home. Hopefully Shuai and I make Shenzhen,” she said.

“I’m going for it. I’m going to Wuhan and Beijing just to play doubles if I have to. That’s a goal, and obviously, Fed Cup.

“(Shenzhen) I think actually will be a really good thing to ride into a Fed Cup week as well. I just keep thinking about (the Fed Cup final) all the time (laughter).

“I’m super excited for it. That is actually the goal for the year — I want to be ready for the Fed Cup.”

Stosur and Stubbs briefly worked together during the Asian swing of 2016 before Stosur entered a long-term arrangement with Josh Eagle, lasting two years.

Stubbs has coached players intermittently over the years, but cannot commit to a full-time schedule due to her broadcast work with ESPN.

“It’ll be fun,” Stubbs said of working with Stosur.

“I’m excited about trying to help her out. I’m changing some mechanics. We worked on her volleys over the last week or two and just sort of pointing out a couple of things just to make things a little bit more clear in her head.

“It doesn’t matter how old you are and how long you’ve been out here — you’re always tinkering with getting better.”