Ash Barty enjoyed a great day at the US Open on Monday, storming into the US Open doubles quarterfinals with Victoria Azarenka and reclaiming the world No.1 singles ranking. 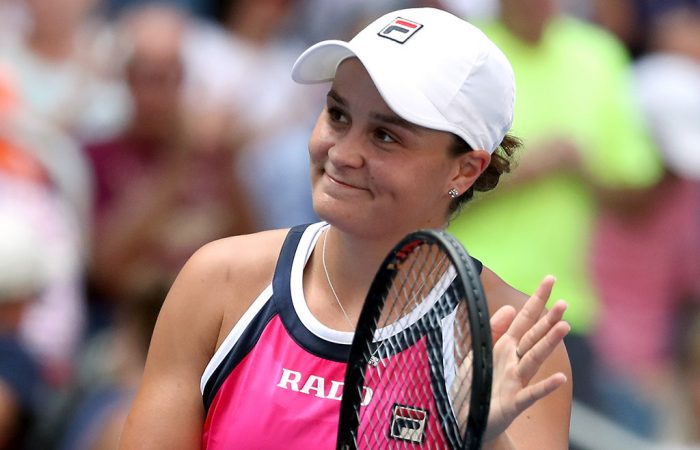 Ash Barty will officially regain the world No.1 spot on Monday after Naomi Osaka’s fourth-round US Open loss to Belinda Bencic.

And the 23-year-old French Open champion is in a good position to finish 2019 at the summit having not only built a healthy rankings lead over her rivals but also having significantly fewer points to defend over the last two months of the season.

The Queenslander celebrated her impending return to No.1 by storming into the US Open doubles quarterfinals with Victoria Azarenka.

The 47-minute mismatch ruthlessly exposed the gulf between the pair of Grand Slam singles champions and world No.1s and the next-generation contenders.

Barty and Azarenka will meet top seeds Timea Babos and Kristina Mladenovic for a semifinal berth.

Karolina Pliskova is in the best position to catch Barty, but it will take a huge effort from the Czech to do so.

Barty will enter the Asian swing with a 376-point lead over Pliskova and with 372 rankings points less to defend. Osaka, meanwhile, will slip to No.3 in the world after the US Open and will trail Barty by 1655 points with 45 more points to defend.

Elina Svitolina could close the gap on Barty with a strong run at Flushing Meadows, but has a large chunk of points to defend after winning last year’s WTA Finals.

Wimbledon champion Simona Halep is barely defending any points following the US Open and could gain ground on Barty — who is defending roughly 1000 points — during the Asian swing.

Ashleigh Barty will return to No.1 on Monday after the US Open.

The battle for year-end No.1 will be fierce this fall.

Barty held the top spot for six weeks after clinching her third title of the season in Birmingham the week before Wimbledon, amid a 15-match winning streak highlighted by her Grand Slam breakthrough in Paris.

Evonne Goolagong Cawley is the only other Australian woman to have the No.1 ranking, for two weeks in 1976.

Barty said “it would be incredible” to join Lleyton Hewitt (2001 and 2002) as only the second Aussie to enjoy the year-end top status since women’s rankings were introduced in 1975 and the men’s in 1973.

“I don’t know what I would need to do to get there. I haven’t really sat down and done the maths or anything like that,” Barty said in New York.

“But I have had my schedule planned for the last part of the year for the last few months, so that certainly won’t change.”

Barty’s climb to the summit has been built on class and consistency. The Queenslander has won an equal-tour-best 45 matches in 2019 and lost only eight times in almost 11 months.

Osaka, 21, lost her grip on top spot with a 7-5 6-4 loss to Swiss Belinda Bencic on Monday. The defeat marked the end of a 17-match winning streak at hardcourt majors.

While Barty and Osaka each won one slam this year, the Japanese suffered a third-round exit at Roland Garros and was ousted from Wimbledon in round one.

As well as her French Open triumph, Barty was a quarterfinalist in Melbourne and reached the fourth round at both Wimbledon and Flushing Meadows.

“We’ve had a great season in Grand Slams for singles. We’ve made the second week every single one, which has been really special,” Barty said after her fourth-round loss to Wang Qiang in the US Open singles event.

“Now we’ll sit back, reflect and look forward to a big couple months to finish off the year.”