Australians Ash Barty and Alex de Minaur went down in the fourth round of the singles events at Flushing Meadows on Sunday. 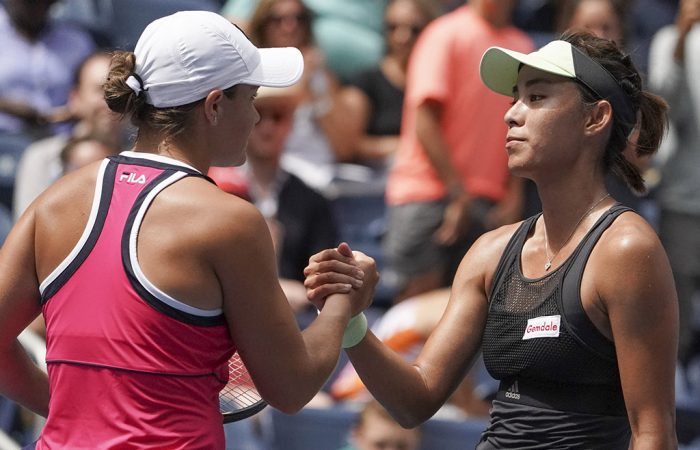 No time to dwell, Ashleigh Barty has set her sights on retaining the US Open doubles crown after exiting the singles event following a fourth-round upset defeat at Flushing Meadows.

A philosophical Barty preferred to reflect on a watershed Grand Slam season, highlighted by her magical French Open triumph in June, than mope about after a 6-2 6-4 loss to Qiang Wang on Sunday.

“It’s been incredible. Yeah, I mean, it’s a tough day at the office today, but it’s been a year where we’ve hit our goals. Obviously I would have loved to have kept going here in singles, but we’ve got an opportunity to do that in doubles,” Barty said.

“Knowing what it was like last year to be able to lift the trophy in doubles was really cool. To be able to have another opportunity to do that now, still being able to play in doubles, is a bonus.

“We’ve had a great season in Grand Slams for singles. We’ve made the second week every single one, which has been really special. Now we’ll sit back, reflect and look forward to a big couple months to finish off the year.”

Meanwhile, Alex de Minaur’s US Open campaign has come to an end, with Grigor Dimitrov handing the Australian a fourth-round defeat.

Yet the 20-year-old Australian leaves New York after claiming the biggest scalp of his career in round three over world No.7 Kei Nishikori, and with his first fourth-round appearance at a major tournament under his belt.

Dimitrov has slumped to 78th in the world after winning only one match since Wimbledon until this week and suffering five first-round defeats in his past six tournaments.

Yet the 2017 season-ending championship winner has rediscovered his touch at the final slam of the year.

He broke De Minaur once in each set to prevail after two hours and five minutes to book a date on Tuesday with five-time champion Roger Federer, in what will be the Bulgarian’s first major quarterfinal since last year’s Australian Open.

Wang too strong for Barty

World No.18 Wang was the highest-ranked rival Barty had played since the French Open semi-finals two months ago.

The second seed’s numbers told the story, with Barty committing 39 unforced errors in 18 games and unable to convert any of nine break-point chances.

“Q was very good, very solid. I felt like she was able to put the ball with great depth in difficult positions for me,” Barty said.

“I still was able to create opportunities. Just very frustrating that on the big points today, Q played a lot better.

“It’s frustrating now. Again, give me an hour and I’ll be right. It’s an opportunity, it’s a new day tomorrow.

“Just because we’ve had a tough hour and a half on the court, it doesn’t reflect on the year that I’ve had or the couple of weeks I’ve had here in New York. It’s still going. Still have an opportunity to try to do well with Vika (Azarenka) tomorrow.”

Champion last year with Coco Vandeweghe, Barty and Azarenka are through to the last 16 of the women’s doubles.

“Obviously playing with Coco (Vandeweghe) last year, I had every intention to play with Coco in Australia (at the start of the year), kind of begin that again,” Barty said of her switch in partners.

“But after her (ankle) injury, it was a bit of a last-minute thing where I just texted Vika and said: ‘Look, I don’t have a partner. Would you be keen to play in Australia?”

“We’ve just kind of gone from there.”