Ash Barty and Victoria Azarenka face one of the game's in-form doubles teams, Sam Stosur teams with Rajeev Ram aiming for the mixed doubles quarterfinals, and Annerly Poulos gets underway in juniors. 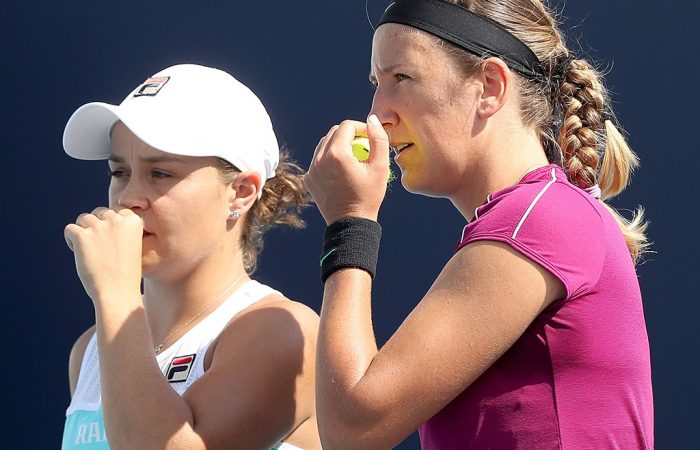 Ash Barty’s singles campaign may be over, but she and Victoria Azarenka will play on Monday for a place in the US Open women’s doubles quarterfinals.

Also in action on Monday is Sam Stosur, who is seeded No.3 in combination with American Rajeev Ram and will be playing for a place in the mixed doubles quarters.

Annerly Poulos, meanwhile, will attempt to emulate fellow Aussie juniors Rinky Hijikata and Tristan Schoolkate, who on Day 7 both won their first-round matches in the junior singles event.

A champion at Flushing Meadows last year with Coco Vandeweghe, Barty has since teamed with Azarenka, with the duo combining to win the WTA title in Rome and reach semifinals in Miami and Toronto.

The American teenaged duo packed out Louis Armstrong Stadium during their upset victory over No.9 seeds Nicole Melichar and Kveta Peschke, a win taking their record as a team to a flawless 11-0 — all straight-sets victories — across both the junior and professional ranks.

They won the WTA doubles title in Washington DC in the lead-up to the US Open.

But they cede years of experience to Barty and Azarenka, who are Grand Slam champions in both singles and doubles.

“Obviously playing with Coco (Vandeweghe) last year, I had every intention to play with Coco in Australia (at the start of the year), kind of begin that again,” Barty said of her switch in partners.

“But after her (ankle) injury, it was a bit of a last-minute thing where I just texted Vika and said: ‘Look, I don’t have a partner. Would you be keen to play in Australia?”

“We’ve just kind of gone from there.”