Aussies in action: US Open Day 7

Ash Barty and Alex de Minaur look to continue their inspiring US Open campaigns when they play Wang Qiang and Grigor Dimitrov on Sunday for a place in the quarterfinals. 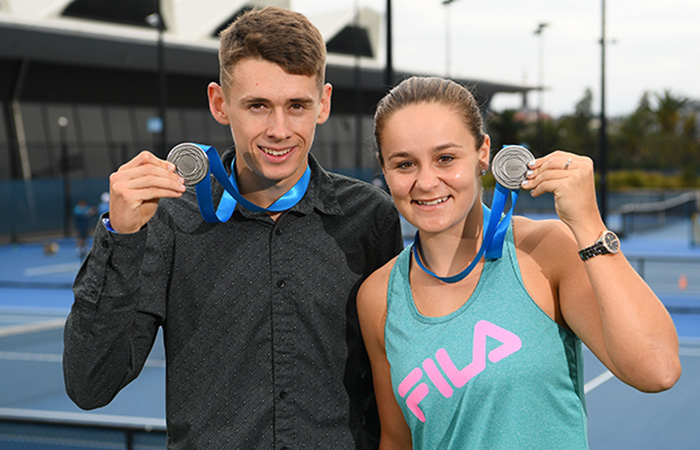 Ash Barty and Alex de Minaur will on Sunday both play for a place in their first US Open quarterfinals.

The Aussie pair will play on two of the biggest courts at Flushing Meadows as they look to continue their 2019 campaigns.

Barty could regain the world No.1 ranking with victory over Wang — and it wouldn’t be undeserved.

In addition to boasting an equal-tour-topping three titles and 45 match wins in 2019 with Karolina Pliskova, Barty has matched or exceeded her career-best performances at a fifth consecutive Grand Slam.

“That’s what we aim for. It’s what we strive to do — the best we can every tournament. Particularly at slams, to make that a bit of a focus point, to try to be ready, to try and make sure that I’m giving myself the best chance to go deep in the slams,” Barty said.

“Really happy to be into another second week.”

De Minaur is taking nothing for granted, promising only to leave it all out there in his bid to gatecrash the quarterfinals at a Grand Slam event for the first time.

Victory over Dimitrov and a ninth win for Federer from 10 clashes with David Goffin would thrust de Minaur into a dream match-up with the great Swiss on Tuesday. Not that that’s providing any added motivation.

“I don’t think about that because I don’t look at the draw. Now I know,” smiled De Minaur, whose two hard-court titles this season are matched only by Kyrgios and reigning US Open champion and world No.1 Novak Djokovic.

Should Barty win and Serena Williams defeats Petra Martic in her fourth-round match, the Aussie and the American could clash in a blockbuster quarterfinal.