The 2019 National Indigenous Tennis Carnival is underway in Darwin and will run until Sunday 1 September. Evonne Goolagong Cawley welcomed participants to the event today. 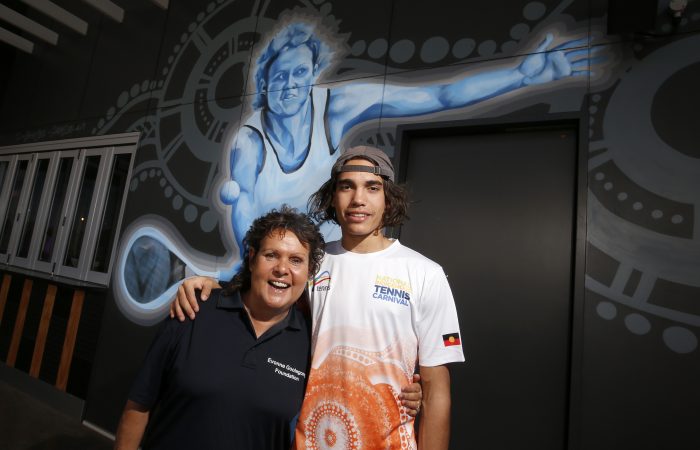 “I am just very excited to be back again here for the National Indigenous Tennis Carnival,” Goolagong Cawley said.

“It was absolutely amazing last year, I remember saying at the time I didn’t believe I would see the day that we would have an Indigenous tennis tournament of this scale. Here we are, going to have nearly 200 Indigenous kids coming from all around Australia for not just the competition, but music, culture and activities. It’s going to be fun.

“It’s absolutely wonderful to see so many Indigenous kids getting involved in this wonderful game of tennis. I am just so excited to be here to be able to go and watch all those kids out on the tennis court,” Goolagong Cawley continued.

Goolagong Cawley also saw for the first time, the mural painted in her honour earlier this week. The artwork was curated by David Collins and painted by Indigenous artist Shaun Lee ‘Hafleg’ and portrait artist Jesse Bell to celebrate the achievements of Goolagong Cawley, alongside current world No.2 Ash Barty. The two Indigenous players are the only two Australian women to achieve the world No.1 singles ranking in the modern era.

“It is absolutely amazing. I didn’t want to see it before it was completed, I wanted it to be a surprise,” Goolagong Cawley said.

“The artist did an absolutely amazing job,” she continued.

Celebrating the cultures of Aboriginal and Torres Strait Islanders, the National Indigenous Tennis Carnival is a celebration of culture and tennis, as well as a community event. The public are invited to attend the Djuki Mala and Yirrmal concert taking place tomorrow evening, Friday 30 August at the centre, with adults tickets starting at $10 and kids entering for free.

In its’ first year the carnival became the nation’s largest-ever gathering of Indigenous tennis players with more than 200 participants from every state and territory taking part. The event is a pivotal part of the Indigenous tennis pathway, and provides an opportunity for not only the elite Indigenous tennis performers, but those just trying the sport for the first time.