Popular Australians Sam Stosur and Daria Gavrilova believe better days are ahead after their respective first-round losses at the US Open. 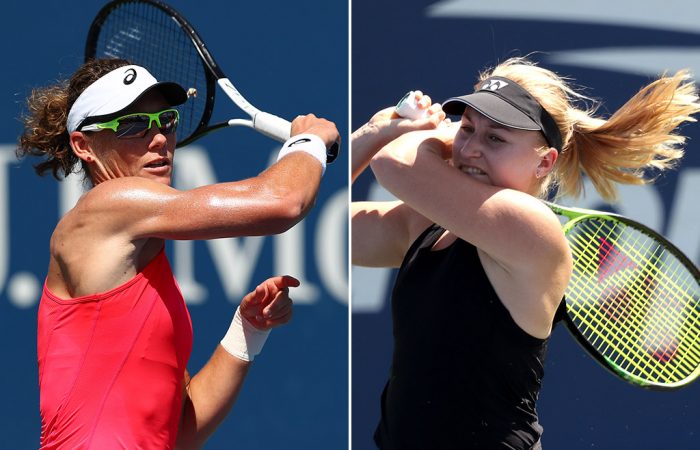 Daria Gavrilova is refusing to give up on her season, eyeing a place in Australia’s Fed Cup final line-up despite another Grand Slam setback in New York.

Meanwhile, vanquished former champion Sam Stosur hopes her 2019 singles campaign doesn’t prove to be her swansong at Flushing Meadows — and she remains alive in women’s and mixed doubles.

Gavrilova bowed out of the US Open with a 6-3 6-4 loss to Frenchwoman Fiona Ferro on Monday, the defeat following first-round exits in Australia, Paris and London.

While the one-time world No.20 departed Wimbledon feeling depressed and needing time out, Gavrilova was more upbeat after her latest exit.

Gavrilova is projected to tumble to 99th in the rankings but has been battling a debilitating plantar fasciitis all year, leaving her in danger of missing direct entry to the Australian Open if she can’t arrest the slide.

But the 24-year-old has no plans on pulling the pin on her season to get on top of her foot injury, saying she would press ahead and play the Asian swing.

“My foot’s still not where I want it to be but I can still play through it,” Gavrilova told AAP. “I think I pushed myself today and I tried my best with the circumstances. I’m getting better. It’s a bit up and down but in my mind right now I’m motivated to keep going.”

Australia play France in the Fed Cup final in Perth in November and Gavrilova hopes to help Ashleigh Barty and Stosur lead her country to its first title in the prestigious teams’ competition in 45 years.

“Going back home (for three weeks before the US Open) was a good result and so I’m a bit refreshed and the body’s a bit better,” Gavrilova said.

“Obviously Fed Cup. I think Alicia (Molik) has a tough decision to make with the second singles player. That’s why I want to keep playing in Asia to earn my spot.”

Stosur, meanwhile, hopes her 15th US Open singles campaign isn’t her last after suffering a 6-1 6-3 first-round loss to Ekaterina Alexandrova on Monday.

“I hope I get one more shot at it,” Stosur said.

“I’ve got doubles (with Zhang Shuai). I’m actually playing mixed as well now. l’ll try and make the most of those two events, absolutely, and next year hopefully I can come back.

“I’ve put myself in difficult positions before and now I’ve obviously got Asia to try and look to get my ranking better hopefully to start next year in a bit better position.”

If not, Stosur will forever cherish the memories of the crowning achievement of her distinguished career, which also includes two other quarterfinals in New York, plus a French Open final (2010) and three semifinal appearances in Paris.

“Obviously everyone talks about beating Serena (Williams) in the final but the whole tournament I played exceptional tennis and I can draw on lots of different pieces from that whole year, even the next year,” Stosur said.

“I’ve played many good matches here besides 2011. This is always going to be a special place for me to come back to.”