Ash Barty trails 5-3 in the third set before recovering to beat Anett Kontaveit, setting up a Cincinnati quarterfinal against Maria Sakkari. 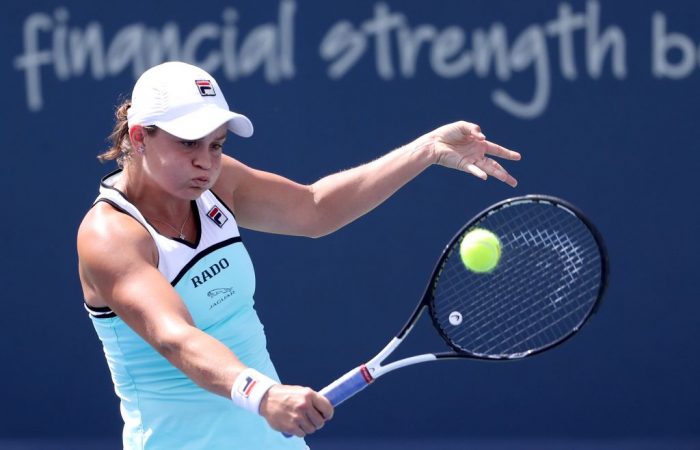 Ash Barty rallied from a set down to edge past Estonian Anett Kontaveit and book her place in the quarterfinals of the Cincinnati Open.

The top-seeded Australian clinched a battling 4-6 7-5 7-5 victory with a deep forehand winner and raised her right fist in triumph after outlasting Kontaveit in two hours and 10 minutes.

The Japanese qualifier, who beat illustrious countryman Kei Nishikori in the previous round, did not allow De Minaur a single break point throughout the one-hour, 22-minute match.

In the process, Barty struck 31 winners and nine aces — while at the same time 49 unforced errors — and broke Kontaveit six times.

Twice Barty trailed by a break in the second set, and fell behind 3-5 in the third, before winning four straight games to advance.

“I think it was a little bit scrappy at times today but proud of the way we were able to fight and hang in there right until the end,” Barty said.

“I think ultimately that was the most important part about today was to try to hang in there as best that I can, fight right until the end and try and make a match of it.

“I have some of my best memories from playing here in Cincinnati. Obviously my first Top 10 win (came) here (over Venus Williams in 2017).

“It’s a beautiful center court, and I think the weather reminds me a lot of home. It can be quite hot and stormy, which is Brisbane in the summer for me. I certainly have really nice memories and enjoy coming back here every year.”

French Open champion Barty, currently ranked second, can reclaim the world’s top spot by reaching the tournament final in the US Open lead-up event in Ohio.

Into the last eight in Cincinnati for the first time, Barty — who fought past Maria Sharapova in her opener — will play Greece’s Maria Sakkari, who dispatched Aryna Sabalenka, 6-7(4) 6-4 6-4 to advance.

“It’s very tough to compare myself with Ashleigh because for me – and I said this last year in Indian Wells when I beat her – Ashleigh is the best player on the WTA tour,” Sakkari told wtatennis.com.

“At that time, she was only Top 20, so I’m glad that I said the truth a little bit earlier than most other people. It’s a compliment to say that my game looks like hers.”

Venus Williams also rallied from a set down to prevail 2-6 6-3 6-3 over Croatia’s Donna Vekic.

Third seed Karolina Pliskova of the Czech Republic is also through after beating Sweden’s Rebecca Peterson 7-5 6-4.