Nick Kyrgios will face No.8 seed Karen Khachanov after beating Lorenzo Sonego in straight sets in the first round of the Cincinnati Masters on Monday night. 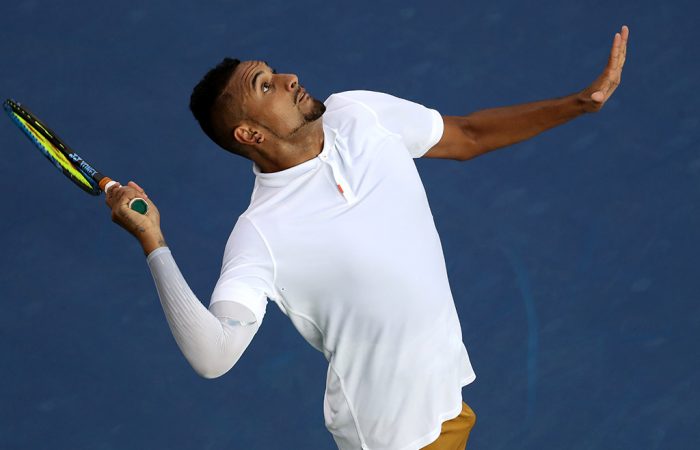 Nick Kyrgios advanced to the second round of the Cincinnati Masters with a 7-5 6-4 win over Lorenzo Sonego of Italy.

Playing on Grandstand court, Kyrgios won 94 per cent of his first-serve points — including his first 14 service points of the match — and produced a typically dazzling array of shots to complete victory in one hour and 19 minutes.

The Australian broke Sonego late in the first set and early in the second to assume control, and looked set to break serve again to win when he arrived at 3-5, 0-30.

Sonego escaped from that position, but Kyrgios’ came through when serving for the match in the following game.

Thompson fell 7-5 5-7 6-4 to Japanese qualifier Yoshihito Nishioka, while Sharma — who herself qualified for the main draw — found world No.47 Aliaksandra Sasnovich too strong, going down 6-1 4-6 6-1.

No.1 seed Ash Barty will take on Maria Sharapova — a match expected to be scheduled on Wednesday — after the Russian beat fellow wildcard Alison Riske on Monday night.

“She’s been playing some of the best tennis of her career,” Sharapova said of Barty following her 6-3 7-6(4) victory over Riske — the player who beat Barty at Wimbledon.

“Playing a Grand Slam champion is no small task so I certainly have a tough match ahead of me.