Alex de Minaur advances to the second round of the Cincinnati Masters on the same day Astra Sharma qualifies for the main draw. 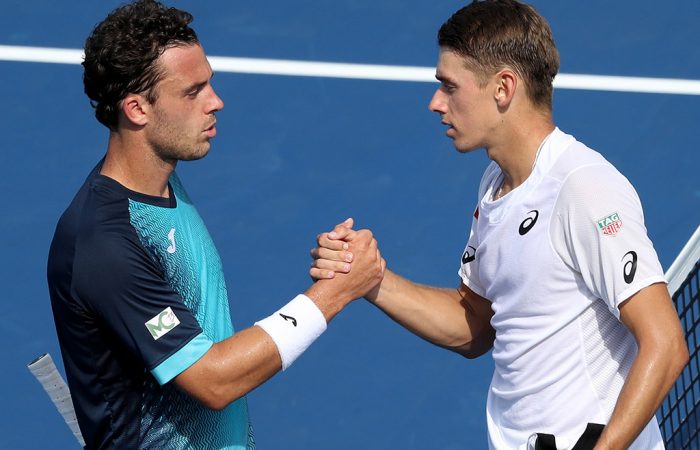 Alex de Minaur won through to the second round of the Cincinnati Masters with a come-from-behind victory over Marco Cecchinato.

The Italian won the opening set before De Minaur charged away with a 6-7(5) 6-1 6-2 win to set up a meeting with either 12th seed Borna Coric or American wildcard Reilly Opelka.

“These wins are often the ones that count the most,” De Minaur told reporters. “To be able to come back from not playing my best tennis and turn it around, I’m really happy to get the win.”

De Minaur extended Cecchinato’s losing streak to 10 matches; he also defeated the 26-year-old in the opening round of Wimbledon last month.

Nick Kyrgios and Jordan Thompson are also in the main draw at the ATP event.

Kyrgios opens against Italian Lorenzo Sonego with the winner to face No.8 seed Karen Khachanov, while Thompson plays Japanese qualifier Yoshihito Nishioka for a shot at Kei Nishikori, the sixth seed.

In the women’s event, Astra Sharma qualified for the main draw with a 6-4 6-4 win over Bethanie Mattek-Sands.

Sharma entered the qualifying draw as an alternate and beat Viktorija Golubic 6-3 6-3 before defeating Mattek-Sands.

She takes on Aliaksandra Sasnovich in the first round of the main draw, with the winner to face No.2 seed Naomi Osaka.

Ash Barty is the No.1 seed; she receives a first-round bye and will play the winner of the match between wildcards Maria Sharapova and Alison Riske.