Nick Kyrgios caps a stunning week in the US capital with victory over Daniil Medvedev in the final of the Citi Open. 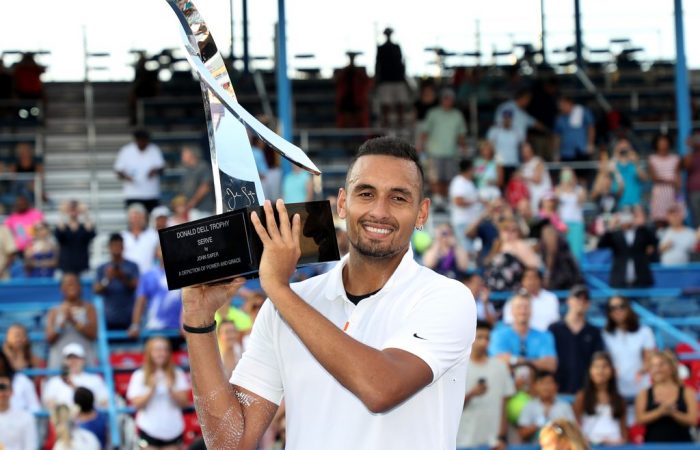 Nick Kyrgios won his second title of 2019 with victory over Daniil Medvedev in the final of the Citi Open in Washington DC.

The Australian prevailed 7-6(6) 7-6(4) over the third seed, a victory that will vault him back inside the world’s top 30 and back into the position of Australia’s No.1 male player.

Kyrgios has now won two ATP 500 titles on hard court this year after triumphing in Acapulco in February, and becomes the first Aussie winner in Washington DC since Lleyton Hewitt in 2004.

The moment @NickKyrgios claimed the @CitiOpen title… *with a little help from a fan* 😛#CO19 pic.twitter.com/UaMwEQkoy9

By beating world No.10 Medvedev, his record against top-10 players this season is now an impressive 5-1.

“It’s been one of the best weeks of my life, from a tennis perspective. I feel like I’ve grown as a person and I’m getting better every day,” Kyrgios said on court immediately after the final.

“This week means a lot — obviously it’s great to get the win. But I’ve proved to myself and a lot of people who’ve backed me that I still have it and can still produce at the highest level.”

Kyrgios was able to do that throughout the match, despite being troubled by back spasms after the first few games.

Medvedev, somewhat curiously, opted to receive first. And against Kyrgios, who had been in a brilliant serving groove all week, this was a decision which did not pay dividends.

Kyrgios did not face a break point and was able to keep his nose in front throughout the entire set, keeping points short in response to his physical discomfort.

Medvedev, however, also served brilliantly, dropping just one point on his first serve as the set progressed to a tiebreak.

Here, he forged ahead 5-2, only for Kyrgios to come storming back; the Aussie out-rallied the rock-solid Russian from the back of the court before conjuring a magnificent return to take control of a point which he won to level scores at 5-5.

Facing a set point at 5-6, Kyrgios saved that with an ace, and snared the opening set when Medvedev’s game broke down.

Kyrgios then received court-side treatment on his back from the physio, popped a pain killer, and loosened up in the second set — exemplified by his increasingly creative shotmaking.

50 minutes later, we have our first tweener!

What took you so long, @NickKyrgios? 😂

Still, neither player faced a break point as the second set progressed in much the same manner as the first.

In the subsequent tiebreak, it was Kyrgios this time who got off to a better start, scoring an immediate mini-break and moving ahead 5-3 when Medvedev fired a forehand long.

Three points later, Kyrgios’ delivered an 18th ace — this one out wide — to win the title.

“I haven’t played that much tennis in the last couple of months so this week the (physical) load’s been pretty stressful. Had some treatment, got very lucky to get out of that first set — he was 5-2 up I think and I got pretty lucky on some of those points,” Kyrgios said.

“But sometimes that’s how it goes — could have easily been him standing in this position. So I’m very thankful for this opportunity.”

Kyrgios is projected to rise to 27th in this week’s rankings, meaning a seeding at the upcoming US Open is likely.

“At the end of the day I don’t care about rankings at all. I just want to grow as a person, as a human, and if that comes along, the tennis player will come with it,” he said.

“That’s all I can do — just small habits every day and trying to get better.”