Nick Kyrgios saves a match point in a third-set tiebreak to beat No.1 seed Stefanos Tsitsipas in a scintillating Washington DC semifinal. 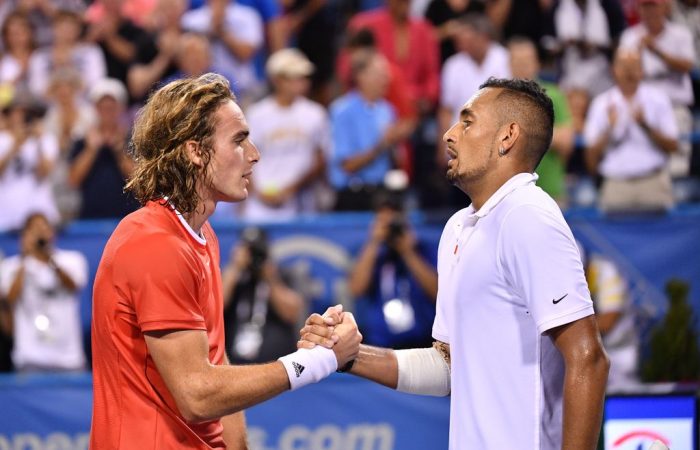 Nick Kyrgios advanced to the Citi Open final in Washington DC with a thrilling victory over top seed Stefanos Tsitsipas on Saturday night.

“This week has been awesome,” Kyrgios said.

“It’s probably one of the best tournament weeks of my life. I’ve really enjoyed myself. D.C. has been a lot of fun. Crowds have been awesome.

“But I’m just doing the right things. I’m having the same routine every day. I’m trying to improve on a lot of little habits, and it’s paying off. Five days in a row competing, I’m pretty happy with myself.”

On Sunday he will face No.3 seed Daniil Medvedev, who beat Peter Gojowczyk 6-2 6-2 in the second semifinal.

🇦🇺NICK KYRGIOS IS INTO THE FINAL! In their first ever meeting, @NickKyrgios defeats Stefanos Tsitsipas

Kyrgios started the match in scorching fashion, breaking Tsitsipas in the third game with a huge crosscourt forehand winner.

He opened the sixth game with an ace at 225k/h, followed that up with overhead winner for 30-0 – his 11th winner at that stage, to just one unforced error – and held at love with a drop-volley winner, fist-bumping fans in the courtside seats after cementing a 4-2 lead.

Kyrgios took the opening set and broke Tsitsipas early in the second set to open a 6-4 2-0 lead.

And then the wheels fell off.

Increasingly frustrated, distracted and volatile, Kyrgios lost six of the next seven games against the emboldened Greek, whose powerful serve and flowing back-court game became more and more effective.

As the third set commenced, Kyrgios relaxed, re-set and rediscovered his groove on serve.

With the Australian ahead 2-1, Tsitsipas experienced trouble with broken shoelaces – a problem occurring in all of his matches this week in the US capital – and a delay ensued.

In unprecedented scenes, Kyrgios helped speed up the process by delivering his opponent a new pair from Tsitsipas’ entourage.

Kyrgios was forced to save two break points in the fifth game, and in the 10th game came within two points of victory at 30-30 on Tsitsipas’ serve, before the world No.6 hit his way out of danger.

But with both players now near impenetrable on serve, the set, and the match, appropriately, had to be determined by a tiebreak.

The winners flowed from his racquet – including a brutal off-forehand winner – and the pair changed ends with Kyrgios ahead 5-1.

Tsitsipas responded with a succession of his own winning shots – with a Kyrgios double fault thrown into the mix – to win five straight points. The Greek now had a match point.

Kyrgios saved that with a booming serve out wide that Tsitsipas returned long, and scores were now locked at 6-6.

The Aussie earned a match point of his own courtesy of an ace, but failed to convert it; a drop-shot was the culprit.

He arrived at his second match point after a thrilling exchange in which Tsitsipas charged into the net but was eventually beaten by a Kyrgios backhand.

Kyrgios then closed out the match with a big serve out wide and a forehand winner off the short reply.

He will be gunning for his sixth ATP title in his ninth career final.

“He was playing well. He was on fire at some moments during the match. He kept holding his serve and putting pressure on me,” Tsitsipas said.

“Nick, in my opinion, is underrated. I guess the rivalry between me and him, it looks bright. I’m pretty sure we’re going to face each other plenty of times in the future.”