Tristan Schoolkate is into the last 16 of the Wimbledon juniors while John Peers won a thriller with Henri Kontinen to reach the men's doubles quarterfinals. 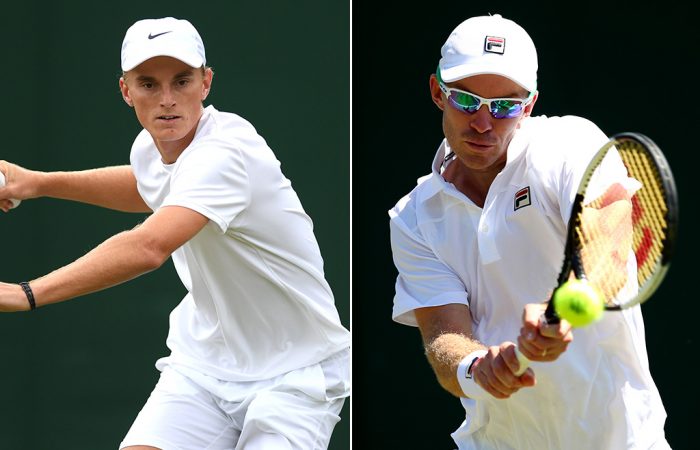 Tristan Schoolkate continued his impressive run at Wimbledon, advancing to the third round of the boys’ singles tournament with a 6-3 6-4 win over Dominic Stephan Stricker.

Later on Tuesday, John Peers – a player Schoolkate often trains with in Perth – combined with Henri Kontinen to defeat Rajeev Ram and Joe Salisbury 7-6(2) 6-4 3-6 4-6 13-12(2) to reach the quarterfinals of the men’s doubles event.

Peers and Kontinen, seeded No.8, created Wimbledon history by becoming the first winners of a match decided by a tiebreak at 12-12 in the final set – a rule introduced to the tournament in 2019.

Amazing to be apart of a little piece of history @Wimbledon today. https://t.co/NZ55ijeGr5

It was their second straight five-set win, after recovering from two-sets-to-love down in the second round against Robert Lindstedt and Tim Puetz.

After their match was suspended on Monday evening due to fading light, Peers and Kontinen resumed their match at 5-5 in the fifth set against 12th seeds Ram and Salisbury.

Peers and Kontinen missed two match points in the 16th game, before the American-British combo broke serve in the 17th to lead 9-8.

But serving for the match, they could not complete the task. The Aussie-Finnish duo broke back immediately and dominated the ensuing tiebreak.

Peers said he and Kontinen had not quite attained the level they reached in 2016 and 2017, a two-year period netting them 10 titles – including an Australian Open trophy and two ATP Finals crowns.

Yet he believed they were gaining momentum.

“Probably over the last 12-18 months we haven’t quite been able to (execute consistently) as much, but then we came out really strong (at the) Australian Open this year, was able to do that for nearly all the tournament,” he said of their runner-up finish at Melbourne Park.

“It’s exciting knowing that we’ve snuck out of a couple of really tight ones here at Wimbledon to be able to progress into the quarterfinals, knowing we can get deep in this event.”

Until now, he had never gone beyond the first round.

Yet he arrived in the last 16 thanks to back-to-back straight sets wins, first against Roland Garros junior finalist and No.7 seed Toby Kodat, and on Tuesday against Stricker.

He also beat Stricker just two weeks ago en route to the semifinals on grass at a junior tournament in Nottingham.

“So far it’s been really really good. I started off real quick in the first round and won that first set 6-0 and sort of from then it’s been pretty good,” Schoolkate told tennis.com.au.

“Today was great – I started off really well again and played really well, served well, returned well and did everything right.”

The 18-year-old graduated from high school last year and only now, in his final year of junior eligibility, is he playing a relatively full schedule.

Thanks to strong results in 2019, he has boosted his ITF junior ranking to No.33, allowing him to directly qualify for the main draw.

With his education a priority, Schoolkate only competed in junior tournaments during school holidays, and is yet to play a men’s professional tournament.

He maintained competitive match fitness in several ways, including serving as a hitting partner at the Hopman Cup, playing club league competition in Perth, and, incidentally, training with Peers, who has a base in the same city.

“He’s said some amazing things to help me with my game, even in singles,” Schoolkate revealed.

“Training with him, I almost enjoy that more than sometimes singles practice. I know him pretty well, and we’re good mates.”

Peers said that training with Schoolkate had been a great experience.

“It’s been good hopefully for him to be able to see just the difference in level from juniors tennis to men’s tennis,” Peers said.

“I know I’ve been able to help him a little bit, just different little things about what you need to do to make that progression … it’s always tough to be able to do that.

“He’s got a great personality for it and a great chance to be able to see what he can do with tennis, and just hopefully he can put his head down and really work hard and continue to improve and see where tennis can take him.

“It’s great to be able to give back a little bit; I know I look up to the guys who came before me as well and always still touch base with them, so to be able to have that connection is always helpful.”