Nick Kyrgios and Rafael will clash in a Centre Court blockbuster while top seed Ash Barty opens Thursday's play on No.2 Court at Wimbledon. 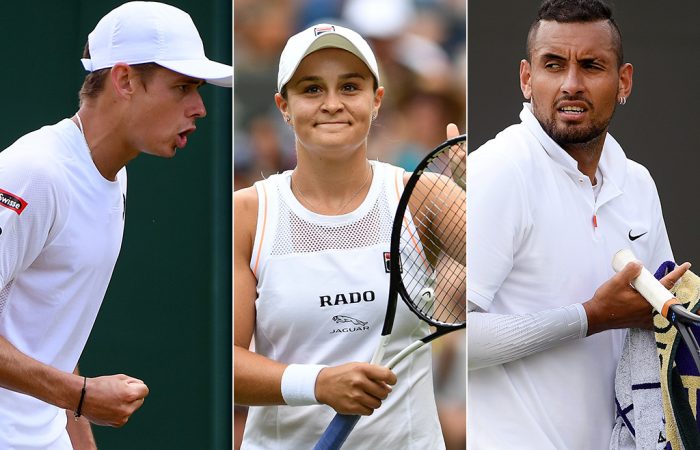 A blockbuster day of action on Thursday sees Nick Kyrgios take on Rafael Nadal in a highly-anticipated second-round clash on Centre Court.

But before that, Kyrgios’ compatriots Ash Barty, Alex de Minaur and John Millman all open play on their respective courts at 11am London time (8pm AEST), aiming for a place in the third round at the All England Club.

Barty, the No.1 seed, takes on Alison Van Uytvanck while De Minaur, seeded 25th, faces Steve Johnson. Millman faces a seed in the form of No.31 Laslo Djere of Serbia.

Doubles action also continues at Wimbledon, with Australian Open champions Sam Stosur and Zhang Shuai, and No.8 seed John Peers and Henri Kontinen, among the Aussies in action.

In their only previous meeting, Barty got the better of the Belgian in the second round of the WTA tournament in Montreal last year, winning 7-6(7) 6-2. But Van Uytvanck is a dangerous prospect on grass, having reached the last 16 in 2018 and arriving in the second round this time around after stopping two-time major champion Svetlana Kuznetsova.

“Van Uytvanck plays with almost a continental grip, it’s quite a flat forehand. She likes sort of getting to net and hustling a lot. Doesn’t give you much rhythm,” Australia’s Fed Cup captain Alicia Molik told tennis.com.au.

“But Barty has enough (variety) to worry Van Uytvanck. But it’s going to be a very different match-up for Ash (compared to round one). But she’s very familiar with her (Van Uytvanck).

“It was a tussle with Svetlana, the match was really up and down. I have to say, it wasn’t a great quality throughout, it went in so many ebbs and flows. And that’s something that Van Uytvanck is going to have to expect from Ash, is that she’s not going to let up, there’s not going to be endless games where she’s making unforced errors. She just brings a lot of quality every single game.

“I loved what I saw from Ash the other day (against Zheng Saisai), and I’m glad she had to fight her way through that match too – it wasn’t easy. She had to win it.”

These two rivals have met six times, and won three each. Kyrgios won their first meeting at this very tournament as a teenage rising star five years ago, and also their most recent clash in the second round of Acapulco in February. Kyrgios arrived in the second round thanks to a five-set win over compatriot Jordan Thompson, while Nadal was a straight-sets winner over Yuichi Sugita.

“I can’t wait. As soon as the draw came out, I was super happy that I saw him in my section. I mean, it’s more exciting,” Kyrgios said.

“When you’re a kid, you want to play the best players in the world on I think it’s the best court in the world. This is something that I can’t take for granted. There’s no guarantee I’m going to be here again in this position. Could have an injury or something like that.

“I’m going to grasp with both hands, go out there, give it my best shot.”

De Minaur is undefeated against the American in two previous meetings, which both came on hard courts in 2018. The Australian won in straight sets in Brisbane, and again seven months later in Washington DC. Both De Minaur and Johnson were straight-sets winners to progress to the second round at Wimbledon; De Minaur over Marco Cecchinato and Johnson over Albert Ramos-Vinolas.

“Very, very big player, especially on the grass. I think the grass really suits his game. He’s got a very mean slice and obviously great serve and forehand. It’s going to be a very difficult match,” De Minaur said.

Millman snapped a five-match losing streak thanks to a straight-sets win over Bolivia’s Hugo Dellien in round one, which set up a meeting with the Serb, who got past Argentine Guido Andreozzi in four tight sets.

This will be their first meeting.

“Laslo’s jumped out onto the scene right now. He had a great clay-court season, but I think that he’s really grown with a bit of confidence,” Millman said.

“I don’t think he minds necessarily the quicker conditions; we saw him on a quicker clay-court in Madrid, where there’s altitude, where he knocked off Del Potro, which is never an easy win. And now he’s seeded at a Grand Slam. So you’ve got to respect these guys who are seeded.”