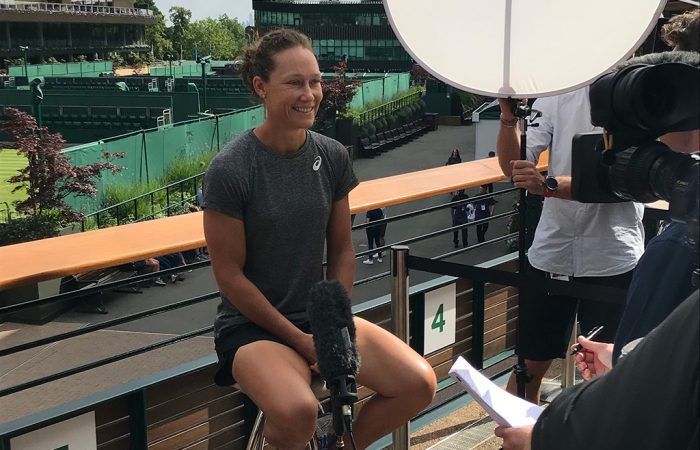 Better known for her exploits on clay, especially at the French Open, Sam Stosur has arrived at Wimbledon with more singles match wins on grass than on red dirt in 2019.

“I don’t think that’s ever happened,” she laughed when chatting with the Australian press at the All England Club on Sunday.

Stosur did not get beyond the second round of any of her five clay-court events this year; she did not qualify in either Madrid or Rome and suffered second-round losses in Strasbourg and Paris, tournaments that have traditionally been the site of some of her best successes.

Yet on grass, her game has comparatively flourished. After a second-round win in Mallorca, Stosur won two matches to qualify for Eastbourne before thumping 30th-ranked Mallorca champion Sofia Kenin in the first round of the main draw.

Moving into round 2 @mallorcaopen. #mallorca #sun #wta #round2 #movingon

“I think the start of the clay-court season for me was a bit disappointing, I wasn’t too pleased with how I was playing. The French I actually thought I played well, but it was my last event for a little while on clay,” she reflected.

“But doing all my preparation on the grass, I think I was really clear with what I wanted to try and do. I guess I’ve just been able to put that into play.

“The last couple of years I think I’ve gotten a better idea of what I wanted to be doing and felt my confident or relaxed or whatever going into playing on this surface. Knowing I can do this and having a more positive outlook, for my singles game anyway.

“I was ready for it and really eager to try and do well in those events.”

Several pundits have, over the years, described Stosur’s game as well-suited for grass-court tennis, and success at Wimbledon. And to an extent, that’s been the case – she has twice won the mixed doubles title as well as reaching three women’s doubles finals at the All England Club.

Yet in singles, while she acknowledged her slice backhand and comfort at the net were assets on grass, her two major weapons – kick serve and heavy topspin forehand – were neutralised.

So she has worked to tweak her game. And the singles wins on grass are coming more readily.

“I just found (grass) hard and stressful compared to other surfaces,” Stosur admitted.

“I’ve been working on trying to flatten out my forehand for a little while now and I think that’s gonna be fantastic for this surface just naturally.

“I feel like I’ve got a better slice serve now – the kick doesn’t always work that great on grass, so for me in previous years feeling like I couldn’t hit my best serve is never a great feeling (smiling).

“Hopefully, fingers crossed, I can keep it all going from these last couple of weeks and really keep going. But Carla’s not going to be an easy one, that’s for sure.”

Carla is Carla Suarez Navarro, the 30th seed from Spain whom Stosur has drawn in round one.

The pair have met eight times, with Stosur winning five; she won their most recent meeting in Strasbourg in 2017 and also their match at Wimbledon in 2012 for the loss of just four games.

Suarez Navarro gained revenge a few weeks later at the same site and on the same surface when they played in the first round of the London 2012 Olympics.

“She’s a very good player, she’s been around as well for a long time, we know each others’ games very well,” Stosur said.

“So I think going into this match it’s, alright, thinking back to the times we’ve played, what’s really worked, what hasn’t worked, and trying to execute our game plans as best we can.

“I feel like I’ve got a really good game to play against Carla, but she’s a quality opponent, so I’m going to have to play well throughout the whole match to try and get through.

“I’m really looking forward to it.”