Julia Goerges, who fell to Ash Barty in the Birmingham final, became emotional when acknowledging the Australian’s rise to world No.1. 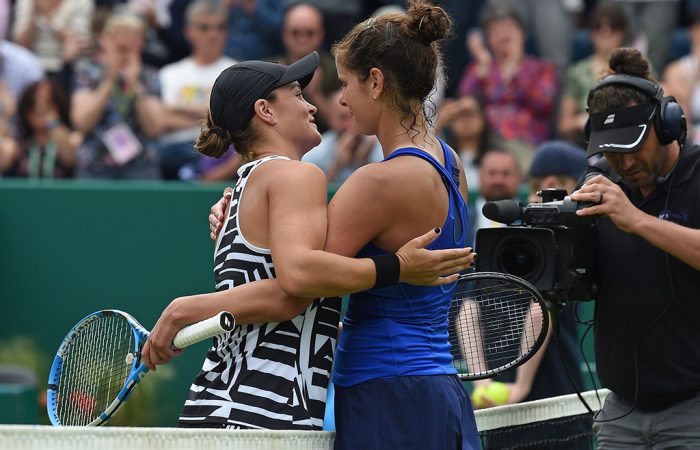 Despite falling in the final of the WTA event in Birmingham to Ash Barty, Julia Goerges was able to tip her hat to her victorious opponent during a heart-warming trophy presentation.

Barty rose to world No.1 by winning the final 6-3 7-5 over the German, a former world No.10 who was struggling for form and had lost eight of her previous 12 matches before arriving in Birmingham.

Goerges held a set point against her doubles partner in the second set and was building momentum, only for Barty to snuff out that chance with an ace.

A few games later, Barty closed out victory before the two women shared a warm embrace at the net.

“I did everything I could today, but Ash was better,” Goerges admitted after receiving the runners-up trophy. “I think it was a high quality match and Ash deserved to win because she was the better player in the important moments.”

She then struggled to hold back tears as she addressed Barty directly.

“I think there is a special moment today for Ash,” she said. “I’m very happy that I can share it with you and becoming No.1 in the world is a very special thing and you became a big friend of mine and I’m very happy that you achieved this goal.”

“It was a high quality match and Ash deserves the win.”@juliagoerges emotionally reflects on a brilliant #NatureValleyClassic final. pic.twitter.com/AwyzDXfoFM

A humbled Barty was equally effusive in her praise of Goerges, with whom she teamed to advance to the doubles semifinals this week at the Edgbaston Priory Club.

“I couldn’t think of a better person to share the court with – we’ve had an incredible week in singles and doubles,” Barty said.

“You’re one of my best friends on tour, you’ve been there for me since I was just a little tacker running around annoying everybody.

“She’s always allowed me to practice with her and kind of share her experiences. She’s an incredible human being with the most amazing team.”

Great week here in Birmingham, many positives to take from the week and glad to have gotten so many grass court matches ahead of Wimbledon. 🌱🌱 Huge congrats to @ashbar96 and her team for the title, becoming world number 1 #teamjule #Wimbledon #NatureValleyClassic pic.twitter.com/1VIaO8MW5W

Asked to elaborate on how her friendship with the German came to be, Barty explained that it dated back to her early years on tour – and that it was facilitated by another old friend.

“Jules and her whole team have always made time for me. We have always enjoyed practicing together and spending time with each other.

“It’s hard playing a friend but in a final I think you’d love to play a friend knowing you have both earned that spot.”

Barty said that she didn’t necessarily feel extra pressure facing a friend like Goerges in the final.

Instead, she described the situation as “unique”.

“Obviously Jules and I are very close and it is tough whenever you are playing a friend, but I know that I respect her and she respects me enough to be put that aside while we are on the court,” Barty said.

“But then as soon as we shake hands, no matter who has won or lost the match, the relationship doesn’t change and it’s a testament to Jules as a character.

“She is an incredible person, someone I highly respect and love to spend time with.”