Ash Barty knows how dangerous doubles partner Julia Goerges will be when they face off in the Birmingham final on Sunday. 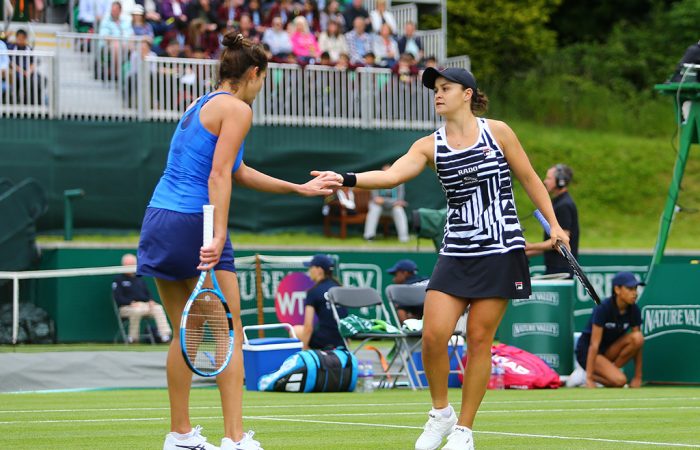 Ash Barty knows the danger that Julia Goerges will pose when the two women meet in the Birmingham final on Sunday.

Barty stands one victory away from the world No.1 ranking and is shooting for her first title in Birmingham after falling in the final in 2017.

Yet Goerges, a former world No.10 with whom Barty played doubles with this week at the WTA grasscourt event, presents a tricky match-up for the French Open champion.

It will be good friends and doubles partners facing off in the Birmingham final.

No.2 Ash Barty will take on No.19 Julia Goerges for the title and the No.1 ranking.

“I played Jules here last year,” recalled Barty, who lost that match in straight sets in the second round.

“She’s got an incredibly destructive game which this week has been on my side of the net, which has been very nice.

“She has the ability to control the game from the get-go and it will be important to try and bring in that variety and neutralise as much as possible.”

“It’s something I try to do, I think. When I’m in a defensive position I have to try to neutralise as much as possible to bring it back to the game style that I want to play,” Barty explained.

Following her singles win, Barty then pulled out of her doubles semifinal with Goerges, citing the right forearm injury that has affected her on and off for several months.

It is understood to be a precautionary measure before Sunday’s singles final, and understandable given the volume of matches she has played this week at Birmingham’s Edgbaston Priory Club.

And despite being well aware of what’s at stake and what she’s playing for, Barty is sticking with the measured processes that have got her to this point.

Can Ash go all the way this week? pic.twitter.com/jGHi729Z7H

That point? An 11-match winning streak, a shot at another title in her fourth final of 2019, and being on the brink of becoming just the fifth Australian ever – and second woman following Evonne Goolagong in 1976 – to ascend to world No.1 since the introduction of the computer rankings.

“I have to try and adapt and be as well prepared as possible for that particular person and that’s all that I can control, try and do that on my half, and if I’m able to execute on the day, it’s a bonus.

“I keep it very simple. I don’t focus on (those other things) at all. They are things I can’t control necessarily. I have to try and do what I can do and that is prepare and do as best that I can tomorrow and try and play a good tennis match and if I win, it’s a bonus.

“There are all things that come with it. But those things are certainly not what I’m worried about.”