Barty into Birmingham final, one win from No.1

Ash Barty beats Barbora Strycova at the Nature Valley Classic to reach her fourth final of 2019 and extend her winning streak to 11. 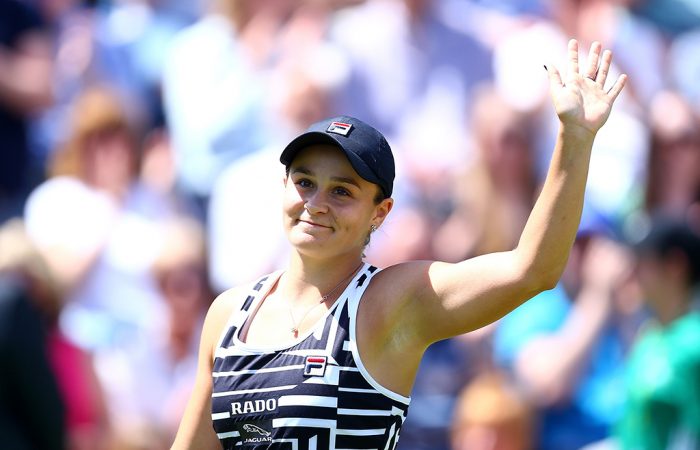 Ash Barty stands one victory away from the world No.1 ranking after powering into the WTA final in Birmingham.

The Australian beat Barbora Strycova 6-4 6-4 on Saturday afternoon to reach her second Birmingham final in the past three years.

The win over Strycova, her 11th consecutive match victory, sent Barty through to a fourth final of 2019 and improved her win-loss record to a stunning 35-5 in 2019.

“It’s really nice to have another opportunity to come out here and play – you have to come out and grab it with both hands,” she said.

“We’re obviously having a really good time at the moment and hopefully we can go one more tomorrow.”

The Queenslander will face doubles partner Julia Goerges in the singles final – and the Aussie later withdrew from the doubles as a precautionary measure in a week that has seen her spend a lot of time on court.

"You have to enjoy it. You have to come out and grab it with both hands."

To say @ashbar96 is motivated would be an understatement.#NatureValleyClassic pic.twitter.com/ECau3DEWZr

Barty is still yet to drop a set in singles, however.

She faced a break point against Strycova in the fourth game of the first set but after erasing that, broke the Czech veteran in the very next game and consolidated with a hold to lead 4-2.

Barty’s superior weight and depth of shot was troubling Strycova, who coughed up several errors in the 10th game; that helped Barty hold to love and take the opening set.

The second set went on serve for the first eight games, and it was here that Barty seemed to sense her moment.

She arrived at 15-40 and snared the break when Strycova’s backhand volley landed wide, and served out the match comfortably in the next game, assisted by two aces – taking her tally for the match into double digits.

Can Ash go all the way this week? pic.twitter.com/jGHi729Z7H

Ten of those aces came in the second set, and she won 83 per cent of first serve points for the match while saving all five break points she faced.

“Barbora was serving well on big points and was doing what she needed to do to keep her nose in front, but I served really well in that second set in particular to keep in touch, and I just knew I needed to take a chance when I got one,” Barty reflected.

“It was important for me to try and get on top early in the rallies and try and use my forehand as much as I could.”