Federer too strong for Millman in Halle

John Millman falls to Roger Federer in straight sets on Halle, while rain stopped Ash Barty, Nick Kyrgios and Alex de Minaur from taking to the courts on Tuesday. 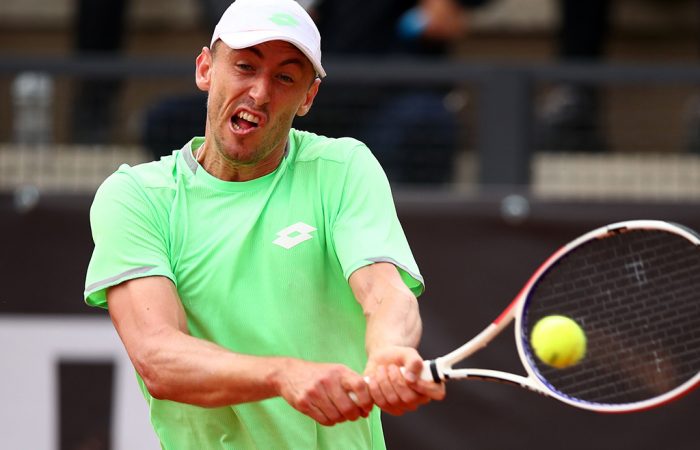 Roger Federer exacted some revenge on John Millman following his defeat to the Australian at last year’s US Open with a 7-6(1) 6-3 first-round victory in Halle on Tuesday.

Facing the nine-time champion of the grass-court event in Germany was never going to be an easy task for the world No.57 from Brisbane. However, Millman more than held his own in the opening set, before Federer took control in the tiebreak.

MALLORCA: Stosur wins to join Tomljanovic in second round

The Swiss great then broke Millman early in the second set for the only time in the match and eased his way to victory in an hour and 17 minutes.

A first grass-court win of 2019 for @rogerfederer 🙌

He defeats John Millman 7-6(1) 6-3 and will face Tsonga in round two in Halle#NoventiOpen pic.twitter.com/i0Zjhea9Po

Meanwhile, Ash Barty’s encounter with Donna Vekic was pushed back a day after play was ended prematurely at the WTA Birmingham Classic due to heavy rain.

Newly-crowned French Open champion Barty was due to open her grass-court singles campaign against Nottingham Open finalist Vekic, but tournament organisers decided on an early end to proceedings with no let-up in the drizzle.

Her Centre Court match with the Croatian will now open proceedings on Wednesday at 11.30am (8.30pm AEST).

In her first outing after her @rolandgarros triumph, @ashbar96 begins with a win in doubles in Birmingham! #naturevalleyclassic #birmingham #ashbarty #juliagoerges #tennis #doubles #wta #grasscourt

In London, rain washed out day two of the Queen’s Club tournament without a ball being hit.

Australian No.1 Alex de Minaur and Nick Kyrgios were both slated to be in action but persistent rain prevented the covers from being removed.

It is only the third time that no play has been possible at Queen’s in the last 18 years and the first time since 2012 that is happened.

Today was only the third complete washout in the last 18 years at #QueensTennis: