The 2019 Fed Cup final between Australia and France will be played in Perth in November. 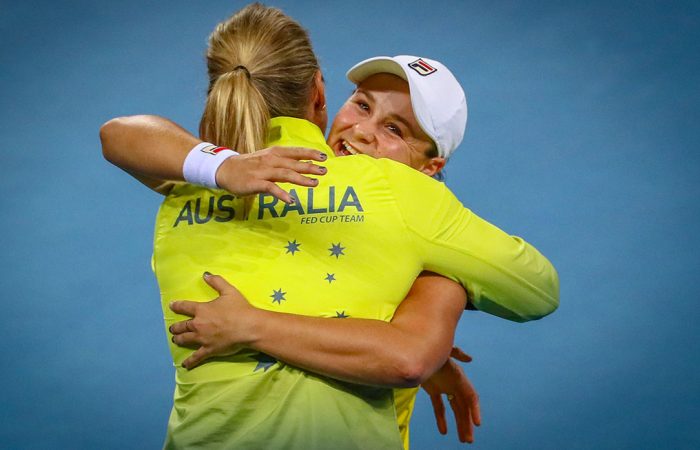 Perth has been named as host city for the historic 2019 Fed Cup by BNP Paribas final between Australia and France from 9-10 November 2019.

“I’m so excited we have the chance to play the Fed Cup Final here in Perth, and showcase the very best of women’s tennis right here in my hometown,” Fed Cup captain Alicia Molik said.

“It’s particularly exciting to be making this announcement just a little over a week since Ash Barty won the French Open.

“Although her win took a lot of people by surprise, we’ve known for some time what an exceptional player, and person, she is, and that it was only a matter of time before she broke through to win a major. Ash’s natural talent is matched only by her work ethic and outstanding sportsmanship, and it’s wonderful to see her blazing a trail not just in women’s tennis, but in world sport.

“Ash has been an inspirational leader in our Fed Cup team over the past few years and we are fortunate to have an incredible group of role models in Australia who love representing their country. Women’s tennis is in an extremely powerful position in Australia at the minute and I’m so proud of every team member who has been a part of this two-year journey to reach the final.

“Our semifinal win was momentous, and it’s a credit to the team in Ash, Dasha [Gavrilova], Sam [Stosur] and Priscilla [Hon] and their work ethic and passion.

“I have no doubt in my mind that we are capable of winning. We’ve had a sensational start to the year, but the job isn’t finished yet, and we are going to ensure that we give ourselves every chance here in Perth to win for Australia. I hope to see fans coming from all over the country to Perth to cheer the Aussies to victory.”

Fed Cup is the world’s largest international team competition for women, with 108 nations competing in 2019. It’s now down to the final two teams, Australia and France.

“I’m delighted we are able to stage the Fed Cup final in Perth, in what will be a spectacular showcase of women’s tennis,“ Tennis Australia CEO Craig Tiley said.

“Perth and WA have so many passionate tennis fans and this is a wonderful opportunity for them to see the world’s best in action, including our latest Grand Slam champion, the inspirational Ash Barty. We want to make sure the event is accessible to everyone, with free tickets for kids under 14 and $20 two day adult passes making that possible. It promises to be a great event.”

“It’s a great coup for the Fed Cup final to return to Perth after 48 years particularly in the lead-up to the launch of the new ATP Cup in January 2020.

“Western Australians are passionate about tennis and I’m sure will jump at the opportunity to see Aussie champions including Ashleigh Barty, Samantha Stosur and Daria Gavrilova take on France’s finest.”

“I’m pleased Perth is becoming host to more top-quality sporting events like this, and I would encourage Western Australians to take advantage of this terrific opportunity and join us in supporting our Australian tennis stars when they play here in WA this November.

“The more we continue to secure major events like these in Perth, the more it helps boost visitor numbers and tourism spend in Western Australia, which helps grows the economy and creates more jobs.”

Ticket prices have been designed to be as ‘family friendly’ as possible, with tickets starting at $20 for adults, and kids going free in bronze category seating for a two-day pass. Up to four kids (14-and-under) can go free with a paying adult to ensure everyone has a chance to cheer the Aussies on against France.

Two-day ticket packages will go on sale to the public via Ticketek at 9.00 am AWST (Perth time) on Tuesday 18 June at www.ticketek.com.au/fedcup.

Team nominations will be announced closer to the final.

The Fed Cup by BNP Paribas final between Australia and France is supported by the WA State Government through Tourism WA.