Jordan Thompson wins an all-Australian quarterfinal with Alex de Minaur to reach the semifinals at the Libema Open. 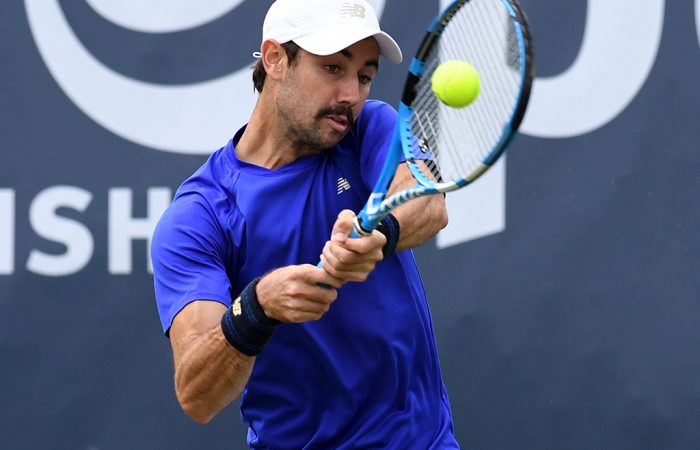 Thompson is one match from his first ATP final; Photo: © Libema Open

Jordan Thompson battled back from a set down to claim a stunning win over fellow Australian Alex de Minaur and secure a place in his first tour semifinal at the Libema Open in the Netherlands.

Third seed De Minaur took the first set but Thompson maintained the fine form he brought with him from the French Open, where he reached the third round, to fight back for a superb 4-6 6-2 6-3 victory in just under two hours.

Unseeded Thompson, 25, will now face defending champion Richard Gasquet, who won two matches in a day to reach the last four, at the grasscourt tournament in ‘s-Hertogenbosch.

After finishing off a second-round win over Mikhail Kukushkin, Frenchman Gasquet returned to the court later in the day to post a 7-6(8) 6-4 victory over Chilean Nicolas Jarry.

Second seed Borna Coric had a terrific tussle with Chilean Cristian Garin, saving a match point and recovering from 5-2 down in the deciding set on the way to a 6-7(4) 6-3 7-6(6) victory.

The Croatian will face Frenchman Adrian Mannarino next after he battled past fifth seed compatriot David Goffin 4-6 7-5 6-3.

In Germany, John Peers and Brazilian partner Bruno Shares reached the doubles final with a 7-6(4) 5-7 10-6 win over Austria’s Oliver Marach and Jurgen Melzer.

Nick Kyrgios and Matt Reid takes on Canada’s Denis Shapovalov and Rohan Bopanna of India in the second semifinal on Saturday.

In the UK, Ajla Tomljanovic missed the chance of securing a semifinal berth at the rain-hit Nottingham Open after losing in straight sets to Germany’s Tatjana Maria.

The sixth-seeded Australian’s quarter-final was the only match completed on grass so for this is week after other matches were moved inside and played on hard courts to ensure play was possible.

But Germany’s Maria got into her stride in the Wimbledon warm-up event on Friday, using slice to good effect to beat Tomljanovic 6-3 7-6(7).