Queensland's Kaylah McPhee has cracked the top 250 - and now has bigger tournaments and targets in her sights. 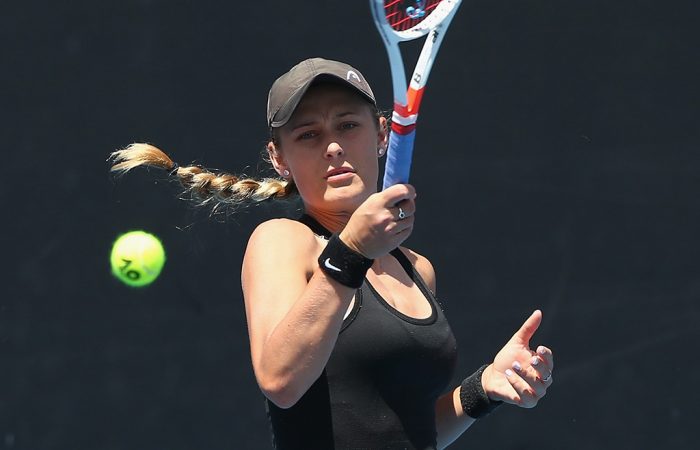 Kaylah McPhee can’t pinpoint a specific thing she is doing differently on the tennis court that might have paved the way for her rise into the world’s top 250.

“I haven’t changed anything in my game. Obviously I’ve been training hard, so my game will continually improve, but I was training just as hard two years ago. Not sure if that’s what you wanted to hear,” she laughed when chatting with tennis.com.au.

The 21-year-old Queenslander jumped to world No.242 after the WTA 125K clay-court tournament in Anning, China, where she built a five-match winning streak en route to the semifinals to notch the biggest result of her career. The altitudinous conditions in China were to her liking, and she felt confident after coming through the qualifying rounds.

That was followed last week by another semifinal run, this time in Kurume, Japan, taking her ranking up to another high of No.221.

McPhee now has a chance to make the cut-off for the Wimbledon qualifying draw, which this year has expanded to 128 entrants for women.

Her progress on the professional tour has been steady rather than spectacular. In her words: shaving 20 spots off her ranking here, 30 there, 40 there. Yet she has always trended upwards. She ended 2016 ranked 1098, rose to 717 by the end of 2017, halved her ranking in the next 12 months, and in the six months since then has improved from No.363 to No.237. “It definitely opens some doors for me in regards just to getting into some (bigger) tournaments,” said McPhee.

She has been a model of consistency this season, reaching at least the quarterfinal stage of five ITF events. Her best result was progressing to the final of the Mildura Pro Tour event in March.

Winning her first-round qualifying matches at the WTA tournament in Hobart, and then a week later at the Australian Open, also infused her with belief. “The more that you win matches, the more you expect to win. If you’re losing, you’re expecting to lose. That’s a vicious cycle,” McPhee explained.

“Now I expect myself to do better. I have more confidence. I kind of feel like it’s possible for me to beat most of the players in the draw. I don’t settle with, ‘Oh well, she’s a good player, it’s OK that I lost’.

“When I was (ranked) 1,000, I was getting frustrated and starting to consider whether I have what it takes. My parents have always believed in me and supported me the whole way; I think I owe it to them because otherwise I may not have improved, because I may not have believed the whole time and kept trying.

“I’m super happy that my ranking is where it is but I guess in a way I don’t feel that happy about it – I still want to be higher.”

With her new position in the game comes a new outlook. McPhee says she plans to play fewer ITF 25K events and will instead target more 60K and 80K tournaments, plus qualifying draws at more WTA events.

McPhee is now the 13th Australian women ranked inside the world’s top 250. Six of them of Queenslanders, many of whom McPhee trains alongside at Brisbane’s Queensland Tennis Centre. She was coached privately until the age of 16, when she was approached by Chris Mahony to join the National Academy based at QTC.

“It’s quite cool how one girl has a breakthrough and all the other girls start to have little breakthroughs at the same time,” said McPhee, who continues to work with Mahony plus fitness trainer Daniel Johnson, and travels with fellow pro Maddison Inglis.

“(QTC is) a really good place to train because there’s so many good players there. I’m always following their results, and I definitely find it extremely motivating when I see Kim (Birrell) reaching third round of the Australian Open, Pri (Hon) having a great year, so many girls having these amazing results.

Despite growing up with a synthetic grass court in her family home’s backyard, McPhee honed a consistent, counter-punching style, often playing deep behind the baseline.

“I don’t know necessarily how I developed the defensive game style – I think it was just honestly a matter of me not wanting to make errors,” she laughed.

“I like to defend, I like to run. I guess you could say in the last two years I have moved that game style to be a little bit more aggressive. I have added pace to my serve. I actually don’t mind faster courts these days.

“So I guess you could say that is something that’s changed a little bit.”

This approach has helped thrust her into that top-250 bracket. And should her confidence remain high and her strong results persist, she is unlikely to stop there.