Barty, Kyrgios through in Rome

Ash Barty secures her place in the third round in Rome after Nick Kyrgios upsets 12th seed Daniil Medvedev in his opening match. 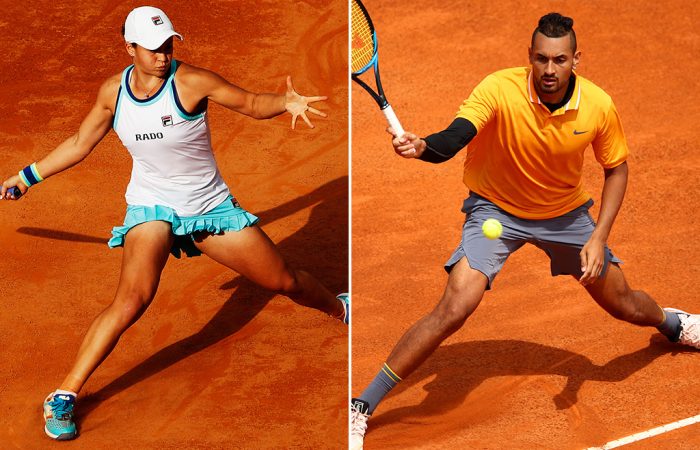 Australian No.1 Ash Barty has continued her fine 2019 form by reaching the third round of the Italian Open after fighting back to beat Viktoria Kuzmova in Rome.

Eighth-seeded Barty lost the first set to her Slovakian opponent, but after banking the second, held her nerve in the decider, earning a crucial late break to wrap up a gritty 4-6 6-3 6-4 victory in two hours and six minutes.

Meanwhile, Nick Kyrgios has kickstarted his clay-court campaign with an impressive three-set win over world No.14 Daniil Medvedev.

Bounced out of Madrid in a first round loss last week, Kyrgios looked up against it for more significant time on the red dirt before the French Open when he was drawn to play the in-form Russian.

But the Australian showed moments of genius in a 6-3 3-6 6-3 win over Medvedev who has a clay-court final and semi-final appearance to his name already this season.

World No.9 Barty, who won this year’s WTA Miami Open, has still to lose to a player ranked outside of the top 10 since last September.

And she maintained her cracking run on clay by firing off 33 winners against the world No.43, including 10 aces, setting up a meeting with either Switzerland’s Belinda Bencic or Kristina Mladenovic of France.

Pliskova, who claimed her second Brisbane International title in January, built a 4-1 first-set lead and then went to 4-0 in the second as she wrapped up a regulation 6-3 6-3 win in just 71 minutes.

“I think it was a really good match from me, because the conditions were tough,” said Pliskova, who now meets the winner of No.13 seed Madison Keys or Sofia Kenin in an all-American match-up

“I think the serve was the key today. She was missing too much, and I was more patient. I was staying in the rallies, and she was missing way too much.”

Kyrgios’s very first serve of the match was delivered underarm – he ultimately won the point – and his unpredictability frustrated the Barcelona finalist.

More underarm serves and a liberal dosing of dropshots were the hallmarks of an impressive first set by the world No.36, Medvedev clearly struggling with his opponent’s tactics.

After receiving treatment on his back following the first set, Medvedev lifted and ultimately secured a break in the eighth game of the second following a loose few points from Kyrgios.

But Kyrgios quickly gained the ascendancy in the decider, breaking the Russian in his first service game.

Medvedev had two break points to get the match back on serve in the seventh game but was unable to capitalise, Kyrgios then spectacularly winning the contest with four consecutive aces.

Kyrgios will play Norwegian qualifier Casper Ruud in the second round, the Canberran looking for more ranking points to gain a top 32 seeding for Roland Garros.

A possible round of 16 clash looms against seventh seed Juan Martin del Potro.