Both verging on the top 100, Alexei Popyrin and Priscilla Hon will play on their favoured clay in the main draw of this month's French Open. 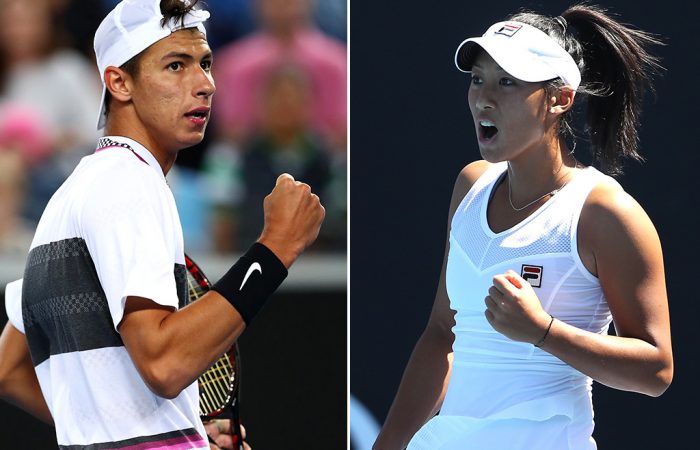 Young Australians Alexei Popyrin and Priscilla Hon have been awarded main-draw wildcards for the French Open, starting in Paris later this month.

The duo boost Australia’s singles representation at the clay-court Grand Slam to 13, a number which could grow if more Aussies successfully win through the qualifying rounds.

Popyrin, currently at a career-high mark of No.109, came close to directly entering the main draw on his own ranking.

His wildcard comes as reward for a breakout season, highlighted by a run to the third round of Australian Open 2019.

He also qualified for the main draw at ATP events in New York, Acapulco, Indian Wells, Monte Carlo and Estoril, reaching the second round at Indian Wells.

This season, the 19-year-old has improved his ranking by 40 places.

“I’m so excited to have the chance to play the French Open and thank Tennis Australia for the opportunity,” Popyrin said.

“I’ve had an incredible start to the year, beginning with the Australian Open, and I can’t wait for another chance to prove myself at Grand Slam level. I’ll do my very best and look forward to giving it my all.”

Hon has enjoyed a similarly successful year, qualifying for the main draw at WTA tournaments in Sydney, Hua Hin and Indian Wells. The 21-year-old also reached the final of the Australian Pro Tour final in Canberra on clay.

Another highlight was her resounding Fed Cup debut in February; Hon teamed with Ash Barty in a live doubles rubber and helped deliver Australia a thrilling 3-2 victory over the United States in North Carolina.

That result sent the Aussies into the World Group semifinals, where they defeated Belarus to make their first Fed Cup final since 1993.

Hon peaked at a career-high ranking of No.130 in April, after beginning the season at No.157.

“First of all I’m so thankful to Tennis Australia for believing in me and giving me this opportunity, and for all the support they’ve given me throughout my career so far,” Hon said.

“I’m so excited to be able to play the main draw of the French Open. I’ve never played in another main draw apart from the Aussie Open and I’m aiming for next year to be getting in on my own ranking. I’m super excited and can’t wait to go out there and compete.”

The French Open begins on 26 May in Paris, with the qualifying event taking place in the preceding week.

*Rankings at week of 13 May