Serving up hope and opportunity

Former Tennis Australia strength and conditioning coach Daniel Buberis is intent on using the sport as a platform for change. 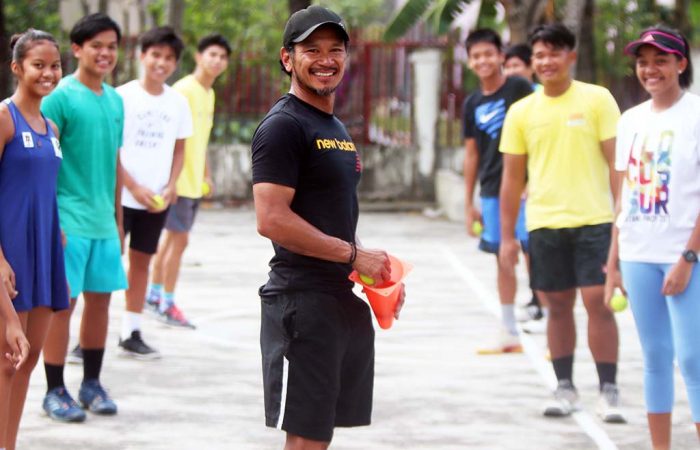 Daniel Buberis, or ‘Bubes’ as he is known among the Australian tennis fraternity, is a bundle of energy. For the last eight years, it has been his job to fine-tune the physical condition of the country’s top tennis talent, helping them to transition from promising juniors into elite men’s professionals.

Ask former colleagues at Tennis Australia like Jason Stoltenberg, the current Head of Men’s Tennis, or Wally Masur, Head of Performance, and they’ll readily attach words like ‘passionate’, ‘committed’ and ‘caring’ to his character.

“The thing about ‘Bubes’ is, he’s in perpetual motion,” says Masur.

“He’s very driven and you can tell he cares about the development of his athletes. Even if he’s not working with them directly, or pushing them to get better physically, he’s involved with making them better mentally, which has been huge.”

For long periods, this commitment to improvement has seen Buberis flying around the world in pursuit of most young players’ version of tennis nirvana – for the likes of Alex de Minaur, Jordan Thompson and Thanasi Kokkinakis, also known as the main draw at Wimbledon.

In October last year, however, ‘Bubes’ decided to wave goodbye to his adopted tennis family, returning home to South Australia for a role with old friends at AFL club Port Adelaide.

In addition to spending a larger portion of his time with wife Kylie and young son Jensen, Buberis was motivated by another mission, one that’s also close to his heart, quite literally.

Since 2017, ‘Bubes’ has had the words ‘Quezon City’ etched in ink just below his right collarbone. The reason? In 1981, as a four-and-a-half year old, he was adopted from a Quezon City orphanage in the Philippines by Peter and Judy Buberis. Peter was a football-playing lawyer working for BHP in Whyalla, South Australia, and wife Judy was a hairdresser who loved netball. 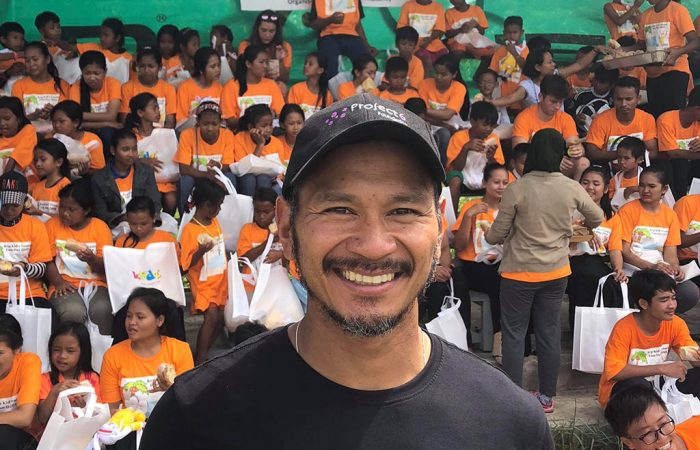 “It was like winning the lottery,” Buberis says while seated at his favourite café in the affluent Adelaide suburb he now lives in, a world away from his former home. Unknown to most, Quezon City is one of 16 smaller ‘cities’ that make up the greater area of Manila, the Philippines sprawling, seething capital of over 12 million people. It’s dense, hot and has a huge underclass of poor and underprivileged.

Given up by his birth mother, whom he has never met, the Quezon City Department of Social Welfare and Development’s Project 6 orphanage was Daniel’s home for the first few years of his life. Project 6 is the name of the city district and seemed an obvious choice for the name of his foundation.

“My earliest memories of being there are of waking up on a cardboard box in my room, and lining up to get my haircut,” he says. “That, and playing in the playground.”

Buberis was there with around 40 other kids, all of them poor, and by his own admission, without much hope for the future. He hopes his foundation can change that.

“In my room that I lived in, maybe two out of the 14 kids got adopted,” he explains, “the rest, I’m not sure. Once they turn 15  or 16, the orphanages can’t really help them anymore. They have to turn them over to the streets to get a job.”

After leaving the Philippines, he went to a predominantly white Anglo-Saxon Catholic boys’ school in Adelaide (the family had moved there after his father changed jobs) where despite excelling at football and athletics, felt that he never quite ‘fit in’. The passing  of his mother Judy from cancer when he was 13 was another turning point.

“I had huge issues after my mother passed away, but the one constant was sport,” he says, “it was always something I gravitated to.”

Ultimately, it was sport that gave him a career, getting qualified with a degree in Sports Science and later a Masters in Strength and Conditioning. It led him to his first job with Port Adelaide, and afterwards with local club Sturt.

“Looking back, it’s pretty clear that it was the family atmosphere of a football club that I craved,” he admits, “and tennis has been an extension of that.”

Taking on the role at Tennis Australia in 2011, Buberis describes his global adventure with tennis as something he had to pinch himself over frequently, and remains incredulous over some of his early experiences.

“There I was suddenly  sitting on a plane next to Mark Woodforde!” he says of a time he went on a coaching tour with the Australian doubles legend. “He’s one half of the Woodies!”

Other highlights have seen him courtside at Davis Cup  ties, travelling to the Grand Slams, meeting Rod Laver  and chaperoning the next generation of Australian players to Challenger events around the world. 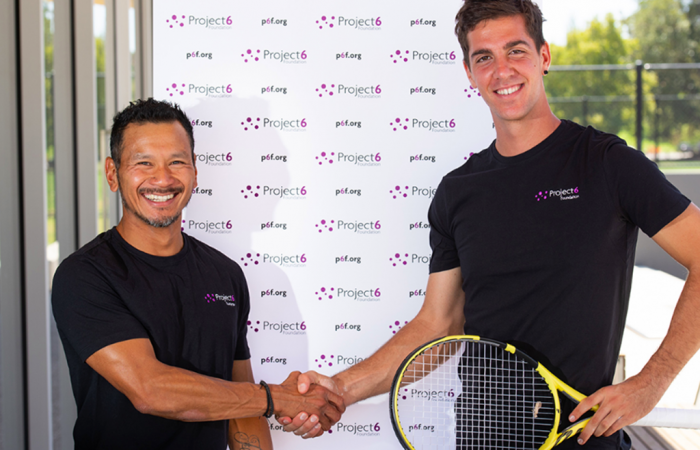 “’Bubes’ dedication to his role at Tennis Australia was second to none,” says Stoltenberg.

“What you saw with him is what you got, full energy and a genuine commitment to the player. With guys like Alex (de Minaur), Jordy (Thompson) and others, he’s been instrumental as a mentor. All the young guys knew that ‘Bubes’ had their back.”

Despite what reads like a dream life travelling the world with tennis, Buberis says that among it all, he still struggled with his own identity. Who was he? Having returned to his orphanage with his father and brother Thomas for the first time in 2007 – Thomas was also adopted from the Philippines — it was a homework question from his son that inspired a first family visit, and that tattoo, in 2017.

“My son Jensen came home from school one day and asked me to show him a picture of when I was a baby. I couldn’t provide  it, and that was the first time we talked about my story,” he says.

What happened once they’d arrived was the catalyst for everything that has since transpired.

“When I saw my own son standing outside of my old orphanage, at about the same age that I was when I left, that was the moment that I knew I had to do something.”

“Everything just seemed to click in about who I was and I knew right then that I had to give back. It changed my life. The only thing left was to figure out how I could help.”

Buberis returned several times following that visit to donate resources and run tennis clinics not only with underprivileged children, but with local coaches. One of the primary goals of his not-for-profit organisation is to pass on the knowledge he has gained over a career that has seen him operate at a consistently elite level. Right now, along with his advisory board, he is busy writing a ‘curriculum for coaches’ that will be continually developed with the support of Adelaide-based High Performance Tennis. The aim is to pass this on to coaches throughout the region for when Buberis can’t be there himself.

After gathering support from his vast sporting network, Buberis registered Project 6 as a charity in Australia in November  2018 and went public with it  in December. A website has followed, and a kick-off event took place at his old orphanage  in March this year. He has also signed local and international volunteer ambassadors like Kokkinakis, Chinese Taipei professional Yen-Hsu ‘Rendy’ Lu, and Filipino pros Ruben Gonzales and Treat Huey. They will take part in fundraising events and help spread the message of the Project 6 Foundation. Ex-professional Roland Kraut has also been important in the Philippines, helping Buberis make corporate connections on the ground. He says tennis is probably the “third most famous sport” behind basketball and volleyball in the island archipelago.

“Daniel’s story  is inspiring,” Kraut  adds, “and the  difference with  him is that he is  not just telling  it, but is actually  doing something  about it to help others. Companies,  brands and even private people shouldn’t hesitate to help because Daniel is doing it all himself, all we have to do is hop on.”

Not overly keen to focus too heavily on his own story, Buberis is happy to use it as a starting point for something that he hopes will eventually touch thousands of lives. With the broad ambition to roll out programs across Southeast Asia, he’s beginning with schools and orphanages like his own in the Philippines and in Cambodia, where he was part of a Tennis Summit event last year.

“The aim of the Project 6 Foundation is to use tennis as an entry point to encourage well-being, physical education and social development in disadvantaged and remote communities,” says Buberis.

“I’m living proof that one moment can change the destiny of a person’s life. Through my foundation I hope to pay my good fortune forward and impact the lives of those living in poorer circumstances than most. It’s not necessarily about uncovering talent as much as it is about giving hope, raising standards and providing opportunity that doesn’t exist now.”

You can find out more about the Project 6 Foundation at www.p6f.org.